Valentine’s Day – it’s a holiday unlike any other. The traditional autumn and winter holidays of Thanksgiving, Christmas, and New Year’s Eve revolve around lots of family, friends, food, and parties. The summer holidays of Memorial Day, Independence Day, and Labor Day bring visions of parties, picnics, BBQ, and swimming.

Valentine’s Day is unique, though. It’s usually not about large groups. It’s meant for two. It’s about romance and rediscovering each other. On Valentine’s Day, three or more is truly a crowd (unless you are into that sort of thing) but like all the other Holidays, a great Valentine’s Day often involves a carefully prepared meal – perhaps a candlelit dinner or romantic picnic.

But have you ever asked yourself, “What wines pair best with food for Valentine’s Day?” Pairing wine with a Valentine’s Day meal offers a different challenge than the other Holidays. Large groups of people go through large amounts of wine (at least at my house they do) so you can bring out an array of wines to match each course. An intimate dinner for two usually won’t involve three or four bottles though, so planning a Valentine’s day meal with wine to accompany it can be tricky.

That’s why we’re here to help! Rule Number 1: Plan your meal carefully.  “All of the foods you choose should go with the wine you choose.” In other words, picking an appetizer that goes best with Pinot Grigio but a main course that really needs a heavy Cabernet Sauvignon is a problem unless, 1) You plan your meal around various wines because you practice proper wine preserving techniques and any leftovers will still be good several days later or, 2) you and your date just drink three or four bottles between the two of you and see what happens.

Rule Number 2: If you frequent our blog, you’ve seen this one before and you’ll see it again. “Don’t ever serve a food sweeter than wine you are drinking.”  There is a litany of reasons why not to do this but just take our advice and don’t do it.

Rule Number 3: Ensure that both of you (or neither of you) eats food from the “That smells revolting but it’s ok if we both eat it” list. At the top – garlic of course. Garlic smells and tastes wonderful on the plate but sometime between the last bite of dinner and bedtime, garlic undergoes an ugly transformation, and what once was appealing quickly takes on the bouquet of a 10-year-old sneaker. I cook with a lot of garlic and thankfully Karen likes it nearly as much as I do so this rule is rarely a problem. Vampires in the neighborhood? Not if I am cooking!

Rule Number 4: Avoid foods that are on the “If you eat that, I’m not getting anywhere near you” list. Why is this on a post about pairing wine and food? Meals on Valentine’s Day often involve the mysteries of aphrodisiacs. For instance, Karen loves smoked oysters. While I’m all for the thought of an aphrodisiac (or ten) being involved in the meal, I can’t stand the smell of smoked oysters which bring to mind a marathon runner’s armpit who hasn’t showered for about six weeks (or so I would imagine). They’re revolting. Karen feels the same way about any kind of salami or cured sausage. She would rather fast for days than eat a piece of salami.

To save you time, Winery-sage.com has frequented a number of sites to find the most frequently mentioned aphrodisiacs to incorporate into your Valentine meal with wine. I claimed this was research for the blog post but Karen looked unconvinced. In no particular order, the ones most commonly mentioned are: 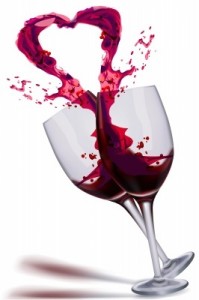 Truth be told, I had to visit a large number of domains until I found one that listed wine as an aphrodisiac, which is how I found myself on “Cosmopolitan Magazine.”

However, once there it’s amazing how much I had the opportunity to learn stuff about guys that I never really wanted to know. I’m a guy so I’d like to think I am an informed source but according to Cosmo, I‘m clueless. Go figure. It was actually kind of creepy.

Karen and Ken have been married for almost 25 years and to date have still not had a fight since being married, probably because Karen has the patience of a saint. They live in the Silicon Valley area but have had a cabin just south of Yosemite, in the Bass lake area, for roughly 13 years. They spend as much time up here as they can. The first 10 years was just relaxation. The last three has been lots of work recovering from damage caused by the Courtney Fire and then continuing on with a remodel. In 2018, they hope to spend as much as a third of their time up at the cabin.

They are now empty-nesters with their older son being married and living in London with his new wife for the next two years, and the younger one living in Ann Arbor, Michigan, getting his PhD in Bioinformatics. From where he got the brains is a complete mystery but the best guess is the dog. They are not sure what they did to drive their kids so far away but the only consolation is that both sons claim to want to move back in the future.