Hiking Along the Merced Wild and Scenic River with Mom

Mom and I headed up out of Briceburg to see if those poppies were blooming along the Merced River. They were, along with many other wildflowers.

Distance: 6.34 Miles, but you can go shorter or longer

I headed up Hwy 140 to Briceburg, turning left at the Briceburg Vistor Center, driving across the bridge, then up the road that is called Merced River Road, which is on the railroad grade of the Old Yosemite Railroad.

I had planned on driving to the end of the road, parking and walking on the trail up to where the North Fork of the Merced River enters the Merced River. I guess I could have checked ahead of time to see what the conditions of the area but I didn’t. When I arrived, I was met with a closed gate with a sign on it, saying that the road was closed to motor vehicles due to rock and mud slides but non motorized travel was ok. A little old thing like that wasn’t going to get in the way of our adventure so I found a good place to park and we started walking down the road. We encountered some obstacles on the road such as big mud puddles and there really were several rock slides. It was morning but the flowers were starting to open up along the road. And we saw all kind of bugs working on those flowers. We had to look close to spot some of them. Photo of Ladybug by Rosemary Gregory

Other bugs were easier to see. Mom said she was ready for a snack break and we found the perfect place down on the river at McCabe Flat Campground. We were eating our Kind Bars and looked across the river, noticing the beginnings of waves of poppies opening up on the hillside. These poppies will only get better as the warmer weather wakes them up in the next week or so. 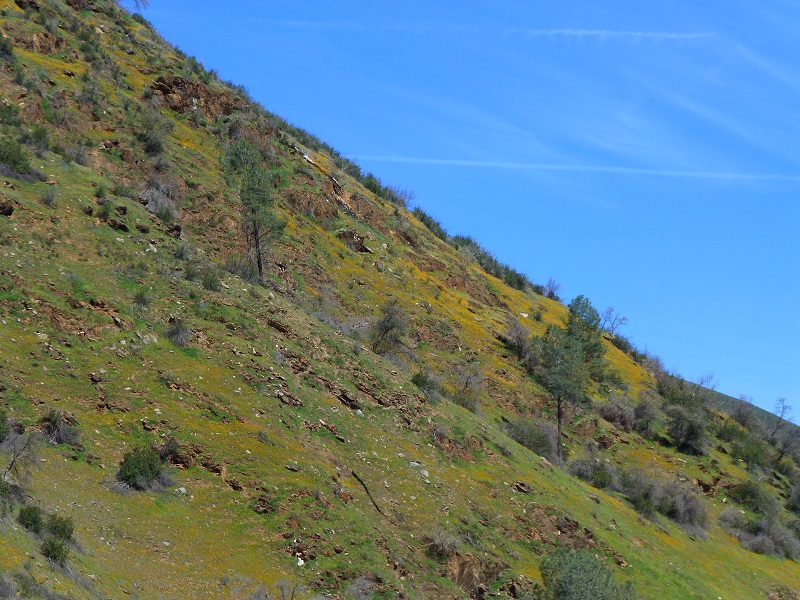 It was time for us to move on and we headed back up to the road and down river. We continued on down the road and the afternoon sunshine meant more poppies. How could we not take more pictures? We saw some some critters and I was surprised to see this Sierra Newt heading home from the river so late in the day. We also saw some beautiful reflections in the Merced River. We spotted a couple of redbuds starting to open up, along with wildflowers of almost every color. It got a little warm in the afternoon and we were glad that we brought plenty of water because we sure drank it. We were walking back with a nice lady and her dog, “Buster” and I was going to take a picture of mom at the sign but Buster wanted to be in the picture, so there you have it! I don’t know when the road will reopen but once it is, you can drive and see some beautiful views, maybe even have a picnic lunch at one of the campgrounds. Check out BLM’s Merced Recreation Are link at the end of the blog for more information on this area. We had a great adventure on our hike and sure didn’t have to drive too far to get to it. After we got home, mom was energized and since her FitBit had her at around 9 miles, she was close enough, she decided to go for 10. She did it, beating my mileage for the day.  Way to go Mom!