Home » Oakhurst » The Future Of The Oakhurst Community Park The Future Of The Oakhurst Community Park

OAKHURST — It was hard to tell exactly how many people poured into Oahurst Community Park on Thursday, Sept. 19 in the early evening, mostly because half of the population was pint-sized, running busily to and fro.

Still, bystanders estimated a crowd of 100 – 150 people had gathered on a school night to hang out in the park and recreate with a picnic.

It wasn’t a festival but it sure was festive. Some spread blankets out on the grass and watched their kids from low slung chairs. Others took over the tables, and in several areas, families of three generations sat passing the late summer day together. Inside the gazebo kids concentrated on drawing pictures of the park with paper and crayons supplied by organizers. Nearby, others played soccer and scrambled through the playground. Balloons dotted the landscape and occasionally got away; an off-leash dog played Frisbee.

Everywhere across the park, people stood talking, chasing kids or having dinner as the smell of charcoal filled the air. If not for the bounce house, a thoroughly modern amusement donated by Liberty Party Rentals in Coarsegold, one would think we’d all stepped back in time, like this was Mayberry and Sheriff Andy was about to come around the corner. Instead it was Madera County Sheriff deputies who patrolled the park, walking around inside and checking the perimeter on their regular shifts. The team leader for Citizens on Patrol stopped by. Other community members showed their support for the growing movement to make the park more family-friendly. Visitors included Dennis Fairbanks and Greg Noll, both in the running for Madera County Sheriff, and current Madera County District Attorney Michael Keitz. The Oakhurst Area Chamber of Commerce was represented by Darin Soukup, and there to have a good time and represent the Community Park committee was Andrew Pence.

Organizers and supporters of the night in the privately owned, publicly used park were pleased with the turnout that resulted from their posting the event, referred to as “Take Back the Park,” on Facebook and SNO. Just days before, Lenna Pavelich, her boyfriend Casey Schuetz and friends Pamela Kurtley and Brian Whitfield decided to throw together a picnic night for families in the park. Area residents have been concerned that the park has been overtaken by a group of people who were reported to have repeatedly committed various crimes, and are believed to have intimidated those who would otherwise use the park peacefully.

Other complaints included drug use and off-leash dogs in the park.

That was the day before. On this night, things were looking pretty good.

Looking around at the action, Kurtley commented, “This is how it used to be when I was a kid.” Schuetz was feeling good about the many people gathered in the park, saying he was “amazed and excited” by the possibilities for activities in the future, citing car shows, concerts and special events for the kiddies. “We can’t do it alone. People need to contribute and we have to continue to come back here and do it,” Schuetz cautioned, referring to the spontaneous gathering.

Pavelich has a five-year-old daughter who was alternately playing soccer, swinging and coloring. Lenna herself was also helping kids with their crayon drawings of the park, feeling joyful and optimistic about what was happening in the park. “We’re tired of feeling like we have to avoid the park,” explained the newly-minted activist who believes Oakhurst would benefit from a shelter of some kind as an alternative to people sleeping in the park. She calls others to action: “We all have a busy lifestyle but it’s about taking time out of our day to stay involved.” Her new motto regarding the park was “use it or lose it.”

Pavelich has since created a Facebook page for the Oakhurst Community Park and encourages all to check in online for information about upcoming events.

Something missing from the spot on Thursday was any obvious sign of overnight inhabitants, individuals and their mobile belongings who would normally be seen at the park. 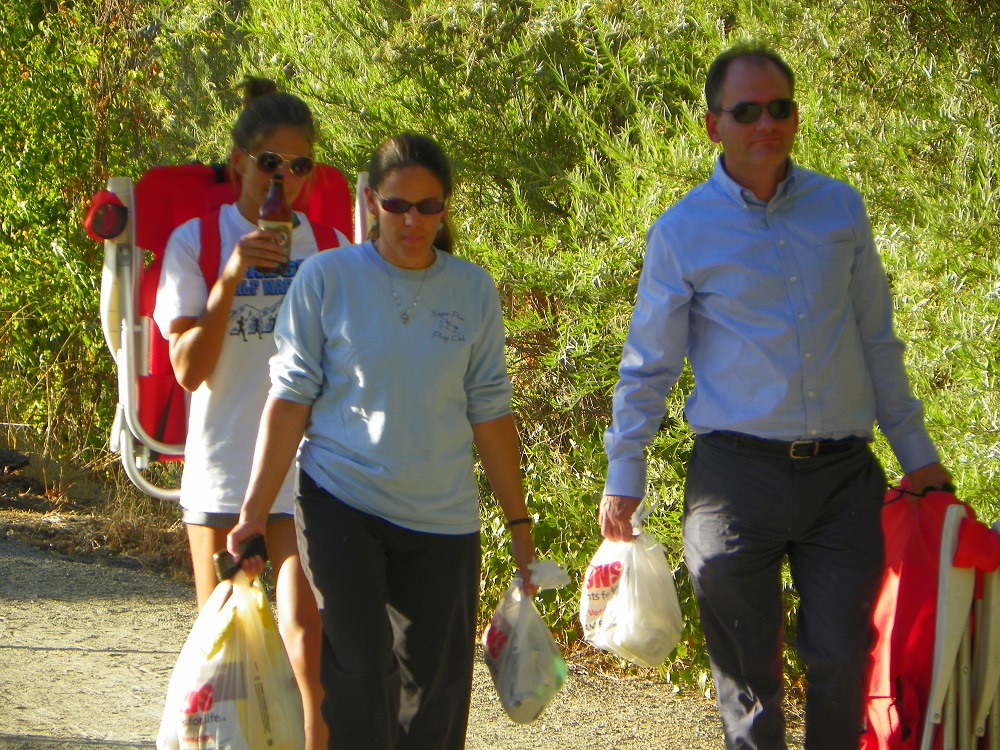 Pastor Helen Mansfield of the New Community United Methodist Church stopped by the park to see what was going on and helped shed some light on the homeless population in Oakhurst. Her ministry works with homeless individuals and others, regularly offering food and shelter, as do other churches in the area. Currently, the churches that will act as hosts this coming season include Sierra Vista Presbyterian and Oakhurst Evangelical Free Church.

St. Raphael’s Episcopal Church, Episcopal to Christ Church-Anglican, Sierra Pines, Yosemite New Life Church of the Nazarene and a group of home churches have contributed volunteers. In the past, Living Way Foursquare Church and Rushing Winds Ministries both acted as hosts.

“There is definitely a problem when people do not feel safe anywhere in their community. That we have a problem in the Oakhurst Community Park is not in dispute,” Pastor Mansfield wrote that night in an email. “Do we really want to solve the problem? One of the first rules of grass roots community organizing is to get all parties at the table.” Pastor Mansfield suggests that the local population of homeless people and those who have caused trouble in the park in the past are likely two entirely different populations.

“The easy thing is to call people names and point fingers, to label one side as good and the other as bad,” wrote the pastor. “There are always two sides to every story.” She stresses that all parties involved need to be in on the conversation about following rules and regulations equitably.

“If we really want a permanent solution, we need buy-in from the broadest segment of park users we can get, and that includes the homeless,” Mansfield attests. “The criminal element that has been so problematic in the park won’t show up to the conversation, but I believe the homeless who use the park would. It might not be a pretty conversation at first, but lasting solutions require hard work.”

She brought up a question that has been on the minds of many: when we talk about “people in the park,” whom exactly are we referring to? Full Circle Family Outreach is the community-wide local ministry that has organized the drive for food and shelter for otherwise homeless during the winter months. Over winter 2010-11, the most recent year for which data is available, Full Circle registered 442 guests in 72 nights. 33 of them filled out surveys. Leslie Stevens with Full Circle offered a brief summary of their findings.

The people surveyed ranged in age from 16 to 72. Respondents were 27 males and 6 females. 88% were Caucasian. Some had been homeless as little as one week while others noted “many years.” The average was 1.5 years. Five of those who responded were veterans. As the park continues to be under scrutiny, a closer look into Oakhurst’s homeless population together with a continued interest in the welfare of all individuals could help turn things around at the park and elsewhere in town.

“If we really want to solve this problem,” says Pastor Mansfield, “we have to stop painting everyone with the same broad brush. We have to be willing to listen to all users of the park, not just one segment. It won’t be easy, but I do believe it’s possible if we just try.”

This is among the first in a series of SNO stories about housing and homelessness in the foothills.