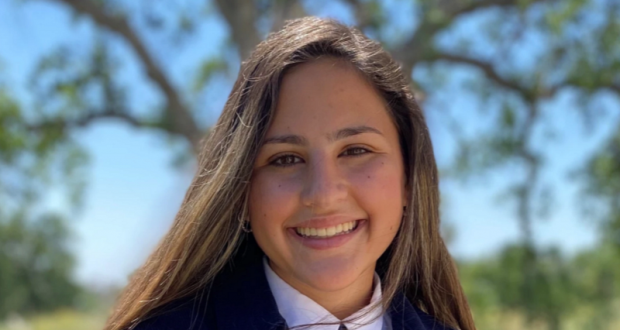 Paige Camacho was the 2021 winner of Division 3 Power, Structural, and Technical Systems in Agriscience in California. She also made it to the top 10 in the nation. Her project included testing the effects of UVA and UVB on the skin and what damage it could cause over long periods of time. Her friends, family, and teachers are beyond proud of Camacho and her hard work. Ag teacher Eduardo Rubio had some words to say about Camacho. When asked about her qualities, Rubio went on to explain how dedicated she is and how much of a hard worker she is, he then said that she has a huge passion for agriculture mechanics. For Rubio, being proud of Camacho is an understatement, he elaborated on how her work, the hours of work, research, and trial and error, is nowhere near being an easy thing.

Rubio then went onto explain a few words he has for Paige, he explained how trial and error is the purpose of this project and how she has been a pioneer throughout the Agriscience industry, he is thankful for Camacho allowing him to be a part of this journey.

Junior, Makayla Beckstead, Paige’s best friend, in an interview had nothing but good things to say about Paige and her project. When asked, Beckstead went on to explain how amazed she is by Camacho’s success, she believes that this is one of the many future successes. Makayla has something she’d like to tell Paige, “I want Paige to know how grateful I am to have her in my life. She is compassionate, goofy, cheerful, outgoing, and an all-around amazing friend. When I transferred to this school I had a hard time adjusting, but after I met Paige she made me feel welcomed and accepted. I am excited to see what more she will accomplish in the future.”

Finally, Paige’s parents, Brett and Tammy Camacho have expressed how proud they are of their daughter. Paige’s perseverance and determination has always been some of her strongest assets, Paige “treads her own path” they stated. Brett and Tammy went on to explain how Paige found a way to succeed even in the toughest of times, like when the whole country was shut down, Paige found a way, she succeeded. They explained how dedicated Paige was to this project and when she sets her mind to something, there is no stopping her afterwards. When her parents were asked about what they’d like people to know about Camacho, they stated “Paige is a very caring person who is willing to help others at the drop of the hat.”

There is no doubt that Paige’s family, friends, and advisors are proud of her. Each one of them had good words to say about her. All who were interviewed, wanted Paige to know that she is nothing short of remarkable. Everyone is so beyond proud of her and loves Paige.

To Paige, “The one who falls and gets up is stronger than the one who never tried. Do not fear failure but rather fear not trying.”― Roy T. Bennett, The Light in the Heart