MARIPOSA – It’s going to be a busy trio of beautiful spring days as thousands flit into town for the annual Butterfly Festival, held the first weekend in May starting Friday, May 2 through Sunday, May 4.

Organizer Jeanetta Phillips wants everyone to know it’s a “family-friendly few days of fun, with no admission cost, and lots of live interaction with the butterflies!” The festival takes place around Mariposa, including the Fairgrounds, the main street, Art Park, and various businesses and other locations around town.

Things kick off on Friday, May 2 at the Mariposa County Fairgrounds from 5 – 9 p.m., with the festival’s Butterfly Hat Competition held during Taste of Mariposa, which showcases Mariposa County restaurants. The cost for Taste of Mariposa, including appetizers and desserts, is $5 and the food becomes available at 6 p.m. Locally made beer and wine will be sold separately at a no-host bar. Butterfly hats – and their makers – will be on display, along with a flock of souvenirs from the live and silent auctions.

On Saturday, May 3 the action starts at 10 a.m. with artisans displaying and selling handcrafted wares and businesses open for customers. The big Butterfly Festival Parade begins at 11 a.m. in downtown Mariposa. Organizers suggest visitors arrive early on Saturday to find good parking, and bring a chair to watch the parade. Guests are invited to dress up in a butterfly costume and join in walking in the parade, bringing up the rear. To do so, go to 12th Street, across from Happy Burger, to join in the action.

Judging will be held between 5th and 7th Streets. Following the parade, entertainment will start up at noon, along with butterfly releases and the children’s costume contest. The winners of the Butterfly Hat Competition will be announced after the parade. There’s also a quilt show at the Mariposa History Museum on Saturday. Artists of all ages and experience levels are invited to use chalk provided or bring their own, and “let your creativity soar.” In addition, the Mariposa County Art Council will be holding an art sale and competition on the back lawn at Chocolate Soup. Entertainment will be going on all weekend at the Art Park, including a special performance by local artists, set to take place after the main event, on Saturday evening. Hungry people can start Sunday, May 4 by having a free breakfast burrito while supplies last, and a visit to the myriad vendors while listening to inspirational Butterfly Spirit music, all starting at 10 a.m. The children’s costume contest starts at 11 a.m.

The Mariposa Butterfly Festival began nine years ago with “one butterfly and a yard sale on 7th Street,” according to co-founder Jeanetta Phillips. Working back in those days with the now-retired Dell Knell, the two women wanted to find a way to bring more people into town to help out the merchants’ pocketbooks.

Then, the tourist bureau consisted of just one person, and Jeanetta and Dell wanted to create an event to bring out community spirit and some tourists, too. Mariposa means butterfly in Spanish, so the Butterfly Festival seemed like a good fit. “It really has morphed into something wonderful,” says Jeanetta. In addition to the Butterfly Hat Competition, the parade and costume contests, music, and ancillary art, the festival provides the opportunity for over a thousand children to get “up close and personal” with butterflies.

“More than 1,200 kids in schools round the area are raising butterflies in their classrooms,” explains Jeanetta. “At the festival, we give the kids an orange slice and they reach into a temporary pavilion, a butterfly house, and the butterfly can’t resist that orange slice. That’s how we do the live butterfly releases.” A round of special events preceeded the Mariposa Butterfly Festival weekend. On Earth Day, Apr. 22, kids at Children’s Hospital in Fresno released butterflies to commemorate the day and a multitude of schools included butterflies in their curriculum to complement the festival.

“The Mariposa Butterfly Festival is a really neat thing,” concludes Jeanetta, saying, “the merchants are happy with it, there’s an educational component that’s a nice little package, and it’s something to call our own.”

As with anything lovely, it’s nicest when shared, so the community at large is invited to attend. Wings are not mandatory, though strongly encouraged. 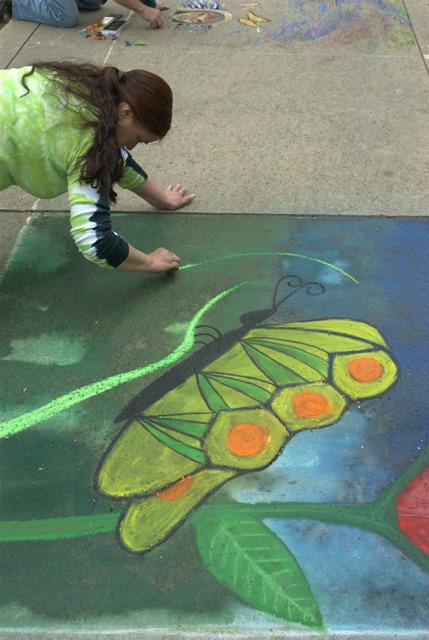