River Of Light On Day Of The Dead

HORNITOS – At once exciting and nearly ethereal, a candle-lighting and procession in the old Mexican town of Hornitos winds its way from plaza to cemetery each year on November 2, to celebrate Dia de los Muertos, or Day of the Dead.

Hornitos in Spanish means “little ovens,” as the town in Mariposa County is named after Mexican tombs shaped like square baking ovens that sat above ground in mounds. The town is located about 45 miles from Oakhurst up historic Highway 49. It’s a beautiful route driving through picturesque countryside, and takes over an hour to arrive.

Photographs by Virginia Lazar and Kellie Flanagan. Click on images to enlarge. For chocoholics and history buffs, it’s interesting to note that one of Hornitos’ early residents was Domingo Ghirardelli, an Italian confectioner whose last name is nearly synonymous with the delicious stuff. Unsuccessful at mining, he opened a general store in Hornitos in 1852, selling chocolates to miners with a taste for sweets. He later moved to San Francisco and made a tremendous fortune producing Ghirardelli Chocolate. The company has been in continuous operation since 1852.

Visitors to Hornitos can see the remains of the stone jail, a store owned by Cassaretto and Gagliardo and George Reeb’s butcher shop, along with the ruins of the old Wells Fargo office, stone Masonic Hall, and a perfectly restored little church perched atop the cemetery. It was this cemetery we’d come to, when last year our group of parents and teens finally drove out to Hornitos for their annual Day of the Dead celebration. We caravanned, arriving way before the suggested 5:30 meeting time in the plaza. That gave us plenty of time to park, walk about, and settle into the scene just as the sun began to set in the west.

The plaza began filling up with regulars and first-timers alike, some in Mexican garb to honor Dia de los Muertos, as a few vendors hawked T-shirts and burritos. The Plaza Bar turns 60 this year, and was open for business, looking like lots of fun. Since we had teens with us, we passed, and opted for fantastic people-watching while milling about, trying to figure out exactly what was going on. This was a pleasure. As the square continued to come alive with people, the darkening skies begged for candlelight, and we were all happy to oblige. For a donation of a dollar or more you can purchase a candle for the procession, or bring your own. We did both. The idea of a presiding Bishop was enough to whip us into shape, and we waited for him as the clock ticked way past the suggested start time of 6 p.m., though we didn’t mind. Once the Bishop did arrive, he was jocular and seemed unfazed by the gorgeously made-up Dia celebrators who the ladies implied would be upsetting for him. The Bishop made his way through the crowd, shaking hands, giving blessings, laughing and smiling as he clambered up some stairs to speak to us from a slightly elevated position.

I put myself squarely in the spiritual-but-not-religious category, yet the Bishop’s words were a balm to my ragged soul. We’d lost a beloved family member months before, amid much illness and depression, and our family was still reeling from the pain of this patriarch’s passing. As sometimes happens, the family seemed to dissolve into a fragmented version of what it once was, as pain exhibited itself as anger and feelings were hurt, some beyond repair. The night in Hornitos continued to veil us like a Spanish mantilla for mourning, and I let the Bishop’s words transport me to a contemplative and peaceful place inside myself. My photographer friends left the plaza to rejoin the previously perched tripods up in the cemetery, while my little family and a few others among us decided to walk with the crowd, in procession with candles, to the place where the dead were waiting for the living to walk among them. 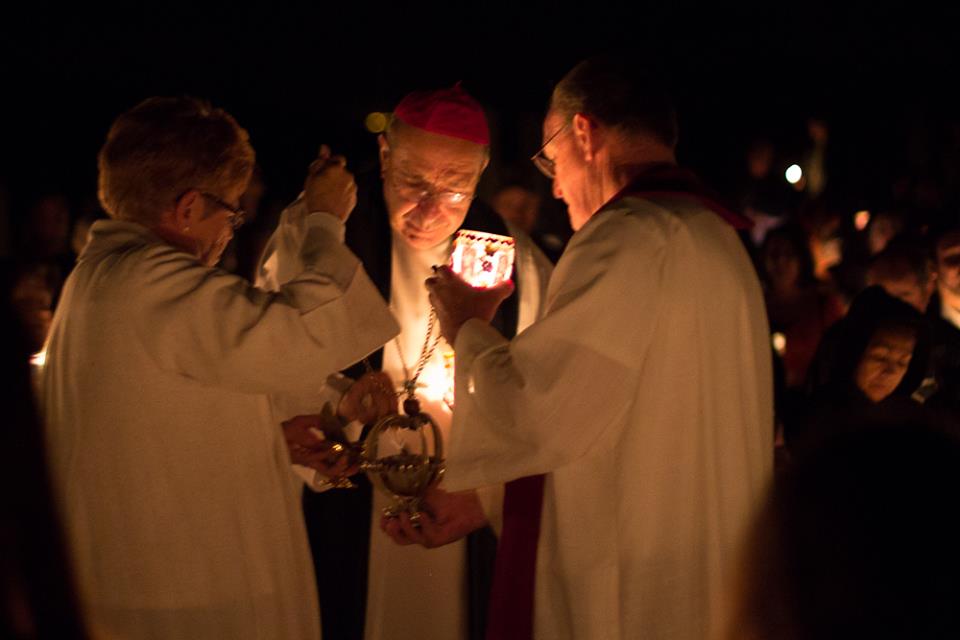 Now the mood lifted, as though the river of light had cleansed us communally of some suffering. While the pleasant, slightly spacey feeling brought about by the slow procession remained for a day or so, it was time to head back down into town for a donation-only Mexican dinner that was truly delicious. Day of the Dead Candle Lighting and Procession takes place this year in Hornitos on Sunday, Nov. 2. Meet in the Plaza at 5:30 and be prepared to wait as the procession is said to start at 6 p.m. but is not necessarily prompt. Wear comfy shoes and bring a sweater just like your mama taught you.

Bring snacks and water and a few bucks to spread around to the non profit organizations that sell t-shirts and offer food and candles. The way to the cemetery is lit by luminarias and is quite spectacular. An art gallery exhibit is set up in the old Pacific Saloon just for the Day of the Dead. Join the town after the procession for refreshments in the Golden Stag Hall.

Drive home safely and watch out for knuckleheads!