BASS LAKE – A report of a single vehicle accident on Road 274 last night brought fire engines, CHP and Sierra Ambulance to the scene about a mile east of the Bass Lake Courthouse.

At 9:22 p.m on Friday, Sept. 19, an Infinity QX56 with eight men on board, was westbound on Road 274, came around the corner at the Willow Creek bridge and smashed head-on into the bridge abutment.

Several of the passengers in the SUV suffered injuries, and one was transported to a Skylife Air Ambulance and airlifted to Community Regional Medical Center in Fresno. Four others were transported by ground ambulance to area hospitals.

CHP at the scene described the occupants of the Infinity as “uncooperative.” The three men who were not injured in the crash waited for a ride into Oakhurst as they laughed, talked on their cell phones, took pictures of the smashed SUV and urinated beside the road.

The driver suffered unknown injuries and was transported for medical treatment. He was also placed under arrest for DUI causing injury. Two fire engines, two CHP patrol cars and two Sierra Ambulances were on the scene with lights flashing, lining the westbound lane, when a 2008 Scion, driven by a 52-year-old Oakhurst woman, approached the scene in the eastbound lane.

The driver apparently did not notice all the emergency vehicles in the roadway, and when she did, jerked her car to the right, hitting the curb. She then careened back across both lanes of traffic, striking Cal Fire Engine 4294 which was parked in the westbound lane. Her car then bounced back across the road, hitting the guard rail and finally coming to a stop just across the bridge on the right-hand shoulder. 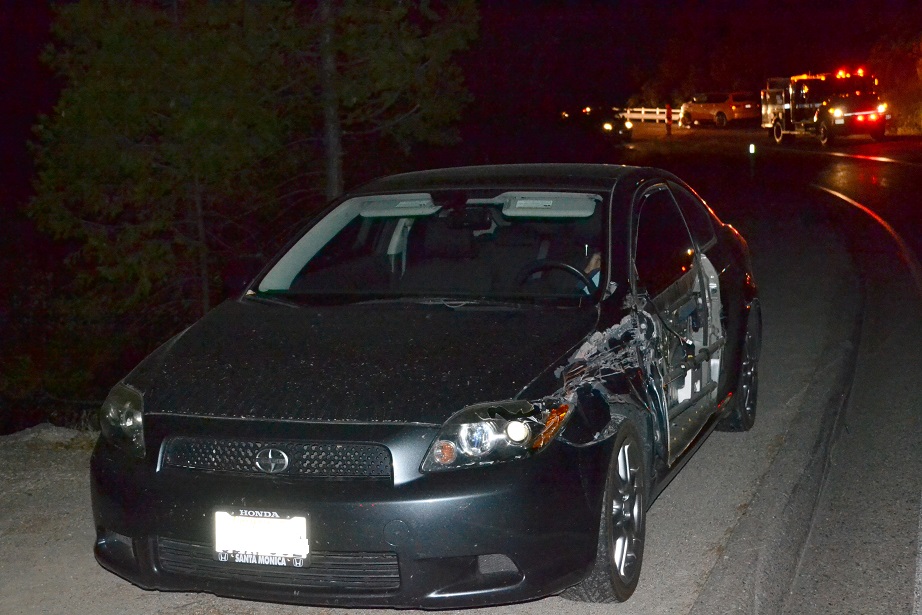 The exterior of the driver’s side door was completely ripped off, though the woman was apparently not injured.

No firefighters were hurt in the collision. A Cal Fire Battalion Chief and Prevention Officer were both dispatched to the scene to investigate the incident involving the fire engine.

CHP implemented traffic control, letting one lane through at a time, until Bulldog Towing arrived to remove the smashed SUV from the bridge. The road was closed in both directions for about 20 minutes as the Infinity was hooked up and towed away.

The scene was cleared and the roadway was reopened at about 11:40 p.m.

The cause of both crashes is under investigation.