MADERA COUNTY – A preliminary hearing was held today at Bass Lake Superior Court for Michael Lee Lapschies, 40, who was previously charged with eight felony counts of arson and one felony count of terrorist threats, according to the District Attorney’s office.

Lapschies was arraigned Thursday, Oct. 8 on an additional complaint filed for a violation of Penal Code section 69, resisting or deterring a police officer. District Attorney David Linn appeared for the People at today’s hearing.

The subject remains in jail and, following a motion by his defense attorney, Lapschies will be psychologically examined to determine if he will be able to aid in his own defense and stand trial. The case was continued until November 12 in Bass Lake Superior Court, at 9 a.m.

Lapschies was arrested on Wednesday, Sept. 30, after a series of eight fires in the Bass Lake area. The first was reported just before 3 p.m. on Road 222 near Pettitt Road, with another near Miller’s Landing on the south shore of Bass Lake, and six more in the area of the Cal Fire Station on Road 223 near Road 426. Lapschies is a former resident of Coarsegold and more currently lived in Fresno. 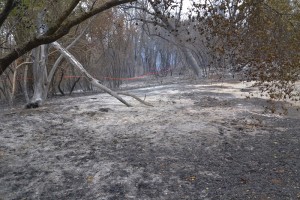 Burnt out vegetation at Snyder Road on Sundance Fire

Meanwhile, in Madera Superior Court, District Attorney Linn appeared before Judge James Oakley, who continued the order for house arrest with electonic survelleillance for two minor defendants in the Sundance Fire arson case, until a further hearing to be held on October 28.

The two Coarsegold teens charged with starting the Sundance Fire, that burned 13 acres along Road 420 on Sept. 13, appeared in court on Wednesday for a detention hearing.

Both boys, ages 13 and 14, were ordered to be placed under strict house arrest with electronic monitoring, are only allowed to go to and from school under the supervision of their parents, and are prohibited from being in possession of flammable material of any kind, according to the District Attorney.

The order of electronic monitoring was also continued for the minor charged with starting the Willow Fire on July 25, burning over 5,700 acres between North Fork and Bass Lake.