June Snowshoeing up to Gaylor and Granite Lakes

I know it is June but we snowshoed up to Gaylor and Granite Lakes, with a side trip to the old abandoned mining town of Dana City in the Tioga Pass area. If the hot weather is getting you down, maybe these pictures will help you cool off.

We parked our car at the parking lot at the Tioga Pass East Entrance to Yosemite, utilized the nice clean restroom and headed up the trail. Well, snow covered the actual trail but we had been up here many times and knew the way. If this is a new trail to you, this could be very tricky to follow and it might be better for you to hold off a bit until the snow clears off of the trail. We didn’t know what kind of trail conditions we would have and Gail suggested we take our snowshoes. This was a brilliant idea on Gail’s part and we wouldn’t have been able to travel as far and easily in the soft snow without them.

When we reached the saddle below Gaylor Peak (elevation 11,004′), we had an amazing view to the south that took in Mount Dana, Kuna Crest, Cathedral Peak and much more, all covered in white. As we topped over this saddle, we got our first glimpse of the larger of the Gaylor Lakes. At 10,335′ elevation, the lake was beautiful and still frozen. We utilized our usual fast descent off of the mountain, sliding on our rear ends, but the icy snow helped me set what I believe is a new personal best speed record and I didn’t have good enough brakes or courage to continue this method of travel, so we put those snowshoes on. We safely arrived at the shore of the lake.

There were all kind of critters that came out to greet us. The first were a couple of marmots that had been close to the shore but headed uphill for the rocks as we approached them. Then came the squirrels. I thought they were pika but I was proved wrong. A pika is a small animal in the rabbit family that is cute as a button. Someday I sure hope to spot one and get a picture, but not on this day. These squirrels were very amorous on this day. The snow was beginning to melt a bit along the inlet to Gaylor Lake. We wandered north, taking in the reflections in Granite Creek. 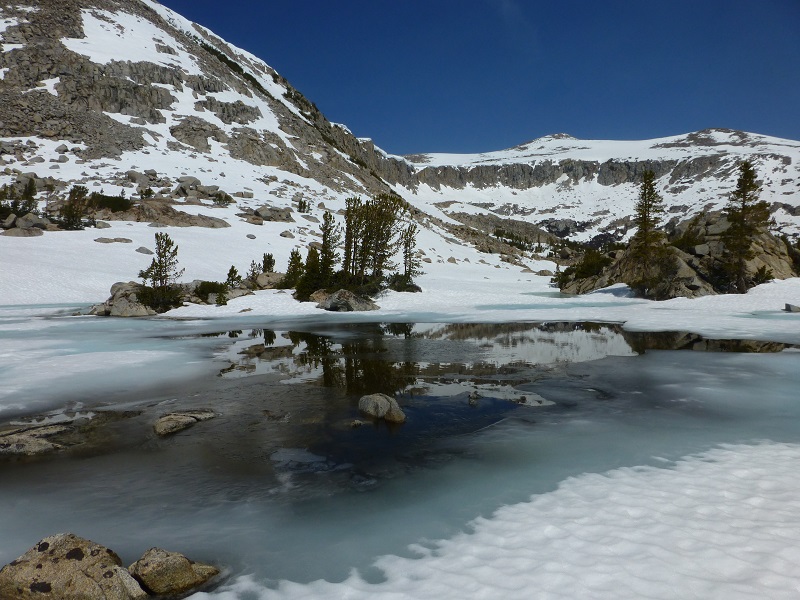 Arriving at the upper Granite Lake 10,427′, we saw that it was still frozen over and a beautiful spot for us to stop and eat our lunch. We couldn’t resist taking the short cross country jaunt over to the old abandoned mining town called Dana City. Although prospecting efforts were made in the Tioga area as early as 1860, it was not until 1878 when claims were made and the Tioga Mining District was formed. The City of “Dana” received a Post Office in 1880. In 1881, the Great Sierra Consolidated Silver Company bought up all of the claims in the Tioga Hill area and started drilling tunnels but never produced pay dirt. At an elevation of 10,769, the view out of this old window frame in this falling down rock cabin always makes me smile and wonder about the people who built it. It was time to head back. We had seen 1 person the entire day, a skier who came down from White Mountain. We decided to try and keep our elevation on Gaylor and side-hilled our way to the saddle and worked our way back down. I still can’t believe that we were able to get another snowshoe adventure in this late. In the afternoon, we could see the ice on the lakes starting to unthaw, reminding us that snow is melting fast in this warm weather and won’t be along too much longer in these elevations.