Hiking to the Top of Mount Dana

Mount Dana is the second highest mountain in Yosemite (after Mount Lyell), reaching 13,061 feet tall. “Slow but steady” was our motto as we climbed the 3,000′ gain in elevation over 2 1/2 miles.

We parked our car at the parking lot at the Tioga Pass East Entrance to Yosemite, utilized the nice clean restroom, then crossed the road over to the south side right at the entrance station where the trailhead is. There is no sign for this trailhead but it is close to this sign in the staff parking area. The trail took us along side some pretty little lakes then started heading up. As we started climbing and getting ready to break out of the pines, I spotted this guy up ahead. After I got home and viewed the picture on my computer screen, I could see that he was sticking his tongue out at me. How rude! The trail headed up, switch backing through the rocks. Then it headed uphill more. Then more. When we reached the top, there was an incredible view. We could see Mono Lake, clear as could be. Dana Plateau also in our sights. Dana Glacier and Dana Lakes were right below us but I was too chicken to look over the side to see them. 360 degrees around us was nothing but incredible views.

We could look out to the west to the Kuna Crest, with many high lakes nestled in its nooks and crannies. We could look north to Saddlebag Lake and those wild colored mountains. As we were getting ready to head down, we noticed someone working their way to the summit and he was nice to take our picture. We returned the favor of course. Mount Dana is named after James Dwight Dana, who was a professor of geology at Yale College. He was born February 12, 1813 in Utica, Oneida Co., New York to James Dana and Harriet Dwight. James was the oldest child out of at least 10 children. James Dwight’s father, James, was a Merchant on the 1855 New York State Census. You may not know that he graduated from Yale College in 1833, then set sail to the Mediterranean Sea as a teacher of midshipmen in the US Navy. When he returned to the United States, he attended the Yale Institute of Natural Science, where he studied mineralogy. In 1836 and 1837, he was an assistant to Professor Silliman in the chemistry lab at Yale. From 1838 until 1842, Dana sailed with the US Exploring Expedition, led by Captain Charles Wilkes.

When the Expedition returned to the United States, James Dana spent the next thirteen years preparing his reports, which contained numerous sketches, maps and diagrams. Parts of these reports were published in the American Journal of Science and Art, the journal of which Dana later became joint and chief editor. Dana succeeded Professor Silliman as Professor of Natural History and Geology at Yale College, serving in this role from 1850 until 1892. He is responsible for much of the early knowledge of volcanoes, obtained from his time with the US Exploring Expedition and later trips to the Hawaiian Islands in the 1880s. His studies in Hawaii led him to theorize on the structure of continents and formation of islands.

His recognition of the linear pattern formed by the volcanic island chains was the first step toward the later theory of plate tectonics. Dana published over 200 papers and books on mineralogy, geology, zoology and volcanic studies, including his “Manual of Mineralogy” in 1848, which has been consistently reprinted and is still a standard college text today.

As we headed down, we walked through an area with the remains of Sky Pilots. When they are in their peak bloom, their flowers are a pretty blue color. I think they were still very pretty, espcially in light that very few plants grow up here. Time to head down through those rocks but as we looked back up at Mount Dana, we could see white puffy clouds start to float by. The shadows of the clouds caused the mountain view in front of us to change colors before our eyes. 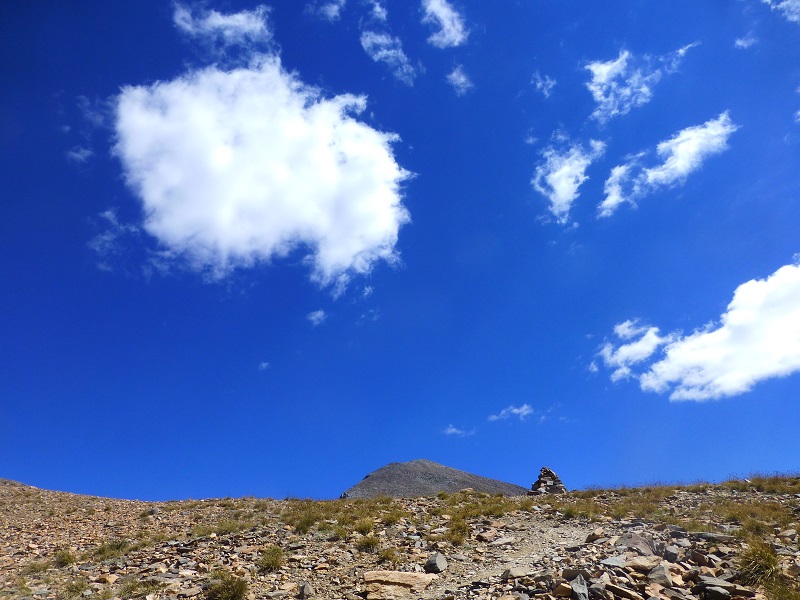 As we continued down, we encountered several people making their way up. One of these was a REI Group. People often ask me about groups to hike with and I have neglected to share information on REI Adventures. They have trips all over the world but also have some in our own backyard, including Yosemite and Sequoia & Kings Canyon National Parks. We talked with one of the members and the guides on this trip. The member had taken several trips with them and gave high marks on this current trip, along with others that he had been on. I have included a link to the trip that this group was part of at the end of this blog. You can also search the site for many other adventures that they put on.

Our local Fresno REI also sponsors many classes and local hikes, along with cycling, climbing, photography, wilderness medicine and many other activities. You can find out more about their schedule at their store or at this REI Fresno Store Link.

I talked about those pretty little lakes along the trail on the way up. Well, they were even prettier in the afternoon when we came down. The clouds reflected in the lakes and the lighting was just right to make the color in the lakes and sky gorgeous! This is a tough hike but how could it not be with 3,000′ elevational gain in 2 1/2 miles. Plus, remember that you also need to come down the mountain on that same amount of elevational loss. Mount Dana’s summit is 13,061′ and that means that if you are not conditioned to hiking at this high of an elevation, you could suffer altitude sickness. Proper preparation for a hike at high altitude is required. You should also be able to recognize the symptoms of altitude sickness. This is very serious and you can die from it. I am not able to write enough about the dangers of this within my blog but here is a link to more information:  Altitude Sickness A Breezy Hike Up To Dana Plateau