The fire has destroyed 111 structures to date.

The recent increase in structures lost is due to the destruction on Sunday of Berkeley Tuolumne Family Camp, which included 3 commercial properties and 85 tent cabins and outbuildings. At a cost so far of $33 million, the Rim Fire currently has 4,191 personnel assigned to the incident, and three injuries have been reported.

According to fire managers, the fire activity began early yesterday on the east side of the fire with long range spotting and active crowning in the trees. Rapid fire growth and extreme fire behavior continue to hamper suppression efforts, and incident commanders are relying heavily on heavy air tankers and helicopters to help get a handle on what has become one of the largest fires in California history.

In the southern part of the fire, crews are securing the line near Pilot Ridge and near the border of Yosemite. Highway 120 remains closed to all inbound and outbound Yosemite National Park traffic at Crane Flat. A portion of the Tioga Road, from Crane Flat to the Ten Lakes Trailhead will be temporarily closed to all vehicular traffic beginning today, Wednesday, Aug. 28, at 12 noon. The closure is anticipated to last through Labor Day to allow fire crews to defend Tioga Road from the advancing fire.

This will also put fire crews in position to defend the Hodgdon, Crane Flat, and White Wolf facilities. 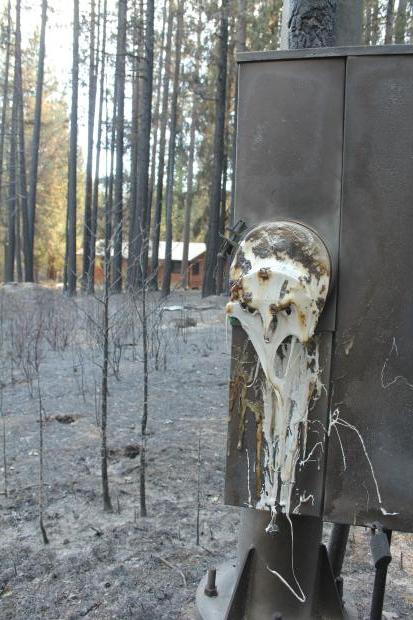 Firefighters made progress on spot fires in the Reynolds Creek drainage and burning operations south of Duckwall Mountain to Skidmore. Crews also were preparing for additional burning operations on the north side of the Tuolumne River.

Firefighters secured line from Pilot Ridge west towards the Yosemite boundary along Old Yosemite Highway. Aircraft were used to support operations throughout the day. Firefighters will continue with contingency line construction in advance of the communities in the Highway 108 corridor, as well as providing structure protection. For tonight, crews will continue with line construction, structure defense and preparing for burning operations. Highway 120 remains closed to all inbound and outbound Yosemite National Park traffic to Crane Flat Campground. A portion of the Tioga Road, from Crane Flat to White Wolf, will be temporarily closed to all vehicular traffic beginning tomorrow, Wednesday, Aug. 28, at 12 noon. Highway 120 east/Tioga Road remains open from White Wolf east to the Tioga Pass entrance. A Mandatory Evacuation has been issued for residences north of Old Yosemite Road (Forest Road 2S01). Highway 120 at the Yosemite National Park boundary west to Buck Meadows has been evacuated. An evacuation center is located at the Mother Lode Fairgrounds in Sonora.

An evacuation advisory is in effect from Tuolumne City and the area east of Highway 108 to Pinecrest Lake. An Evacuation Warning has been issued for all residences north of Bull Creek Road (Forest Road 2S02), Bondurant Mine Road, Texas Hill Road, and Wampum Hill.