Mom and my dog Sally were in search of blooming dogwoods and we headed up to Nelder Grove, just out of Oakhurst. We saw a few of those dogwoods starting to bloom, along with gooseberry and apple. It was my mom’s first visit to Nelder Grove and I think she was quite impressed with those huge Giant Sequoias, thousands of years old. We had the place to ourselves!

Highlights: Mom and I, along with my dog Sally, roamed the trails in Nelder Grove to look at the really Big Sequoias, checked out the spring blooms and had a great picnic lunch. Some dogwoods were just starting their blooms.. 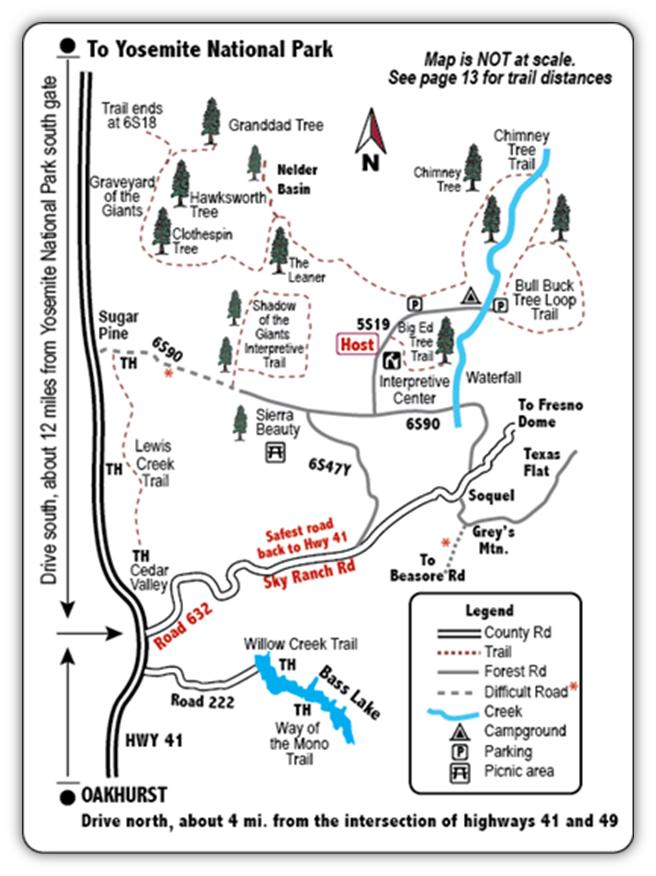 We headed north on Highway 41 out of Oakhurst, turning right on Sky Ranch Road, following it past the turnoff to Nelder Grove (Road 6S47Y) to Road 6S90 on the left where the Nelder Grove Campground sign was. I started to spot dogwoods, already well leafed out with no blooms at the lower elevations so things did not look good. The last time I had been up here was January 24 of this year and the gate to the Campground was closed so we walked up from that point.

We weren’t sure if the gate would be open yet for the year but we lucked out and it was! We drove up the dirt road which hadn’t been graded yet this year and there was one spot where a low clearance vehicle might have had a hard time getting up that part of the road. We parked at the cabins and walked from there. We were happy to see that there was a porta potty here that was very clean. This was the first time that mom had visited Nelder Grove and she really enjoyed the logging interpretative area that John Hawksworth had built with life-size replicas of the logging aids used by Madera Flume and Trading Company back in the 1880s.

We took a close look at the two-pole chute, cross-log chute and an example of the tramway the loggers used to get the lumber produced from Mill #4 to the flume. The descriptive signs on them to help you understand how those loggers got the trees to the mill. Mom was really impressed with the detail of the cabins, which were used during the latter half of the 19th century and the first half of the 20th century in Biledo Meadow. These cabins were moved from Biledo Meadow during 1980-1981 to Nelder Grove. We took a short stroll down to see the Big Ed Giant Sequoia. We walked up the road to the Campground, then headed up the ¼ mile trail to the check out the Bull Buck Giant Sequoia. Along the way, we saw gooseberry just starting to bloom. Mom spotted a mushroom just starting to poke out of the dirt. There were a few pockets of dogwoods along California Creek above the campground that were starting their bloom. The dogwoods in this area are known as the pacific dogwood, mountain dogwood and western dogwood . . . same plant but people have different common names for it. The scientific name for it is Cornus nuttallii, named after Thomas Nuttall, an English botanist and zoologist who worked in North America in the nineteenth century.

The dogwood flower displays in the spring are gorgeous and the “flower” can be large, getting up to 6 inches or so across. What we commonly refer to as the dogwood white petals are actually bracts and the flowerhead in the middle will produce the fruit that will turn a pink-red when mature that contains 50-100 seeds. They say that the seeds are edible but don’t taste very good. I have never tried them personally. When we got up to the Bull Buck Tree, it was so huge, we had to walk quite a ways uphill to be able to capture a picture. We wandered up several different trails to see what we could find. We first took the little trail that starts out just downhill form the Bull Buck Tree, following a very small creek uphill. There were a couple of trees that had fallen across the trail. Sally would go over them and mom would go around. After exploring that area, we headed back toward the campground, taking another trail that branched off. We made our way back to the campground and chose a picnic table that was mostly in the sun. It was chilly! We spread out our picnic lunch, watched the birds and Sally entertain us. We looked over toward the meadow area and could see the old apple tree was fully loaded with flowers. After taking a closer look at that apple tree and getting some pictures, we walked back to the car and Sally was still full of energy, climbing up on a big old log as if she was saying “take my picture!!” So what else could I do? Recreate Responsibly With These Helpful Reminders