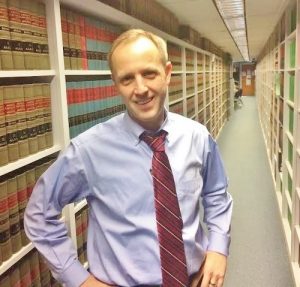 MADERA COUNTY — The race for Madera County District Attorney heats up as a third candidate announces his intentions to run in the June 5th primary election.

“As a veteran and former Platoon Leader, it was no longer acceptable to watch from the sidelines,” said Hornick in a statement released this weekend.

“After deep personal reflection and several discussions with members of the community, I am formally announcing my intention to run for the office of District Attorney in Madera County. The people of Madera County need someone who will focus on the issues with proven leadership experience, a strong tough on crime record, and unquestioned integrity. I will hold to my obligation of putting our constituents and the County ahead of my own political interests.”

Hornick is the second challenger in the race against Linn. Sally Moreno, the prosecutor who won the conviction of the Yosemite Lakes Park arsonists, announced her intention to run in March 2017.

David Linn, who was elected to the office in 2014, was censured by the Madera County Board of Supervisors on Nov. 27, 2017, amid accusations that he was “creating a hostile workplace environment and using sexually and racially offensive language.”

The Board had demanded his resignation in the wake of a complaint that was filed, and an independent investigation found that Linn used vulgar and offensive language, and engaged in “conduct unbecoming of an elected District Attorney and has tarnished the reputation of the Madera County District Attorney’s Office.”

Hornick was hired by Linn about three years ago, and won a conviction of murder and attempted murder in the George Taylor-Windsor case in May 2017 in Bass Lake Superior Court.

“I made my official announcement this week to seek the office of Madera County District Attorney. Now the real work begins,” says Hornick.

The two candidates who garner the most votes in the June 5 primary will be on the ballot in November.

Paul received a Bachelor Degree in Criminal Justice from the State University of New York at Oswego, magna cum laude, in May 2000. While attending SUNY-Oswego he got his first taste of the law while interning for the Oswego District Attorney’s Office, and later for the U.S. Secret Service Syracuse office. Paul went on to earn his Juris Doctorate (J.D.) from Nova Southeastern University, and became a member of the Florida Bar in May 2005. Paul’s drive to serve the law continued as he interned for both the Immigration and Naturalization Services, and Immigration Customs Enforcement in their Miami offices. Upon completion of law school, he worked for the Florida State Attorney, 17TH Judicial Circuit in Broward County.

Paul Hornick entered the U.S. Army Officer Candidate Program in January 2009. After completion of Basic Combat Training and Officer Candidate School, he was commissioned as a Second Lieutenant in July 2009. He would serve as a platoon leader and as a battalion adjunct during his Army tenure. In July 2012, Captain Hornick transitioned into the U.S. Army Reserve Judge Advocate General Corps. He became a member of the California Bar in December 2013 and graduated from both the Judge Advocate Basic Course and Judge Advocate Advance Course, Charlottesville, VA. He continues to serve with the 75th Legal Operations Detachment, and is presently under review for promotion for the rank of Major.

In October 2015, Paul Hornick became the Senior Deputy District Attorney for Madera County. During his tenure in the District Attorney’s Office, Hornick got the maximum convictions for George Taylor-Windsor who had been convicted of murder and attempted murder in the ‘Hwy 41 Killings’ in Bass Lake; and Donald Edward Anderson for felony DUI drug possession. His trustworthiness and resolve were noticed by his peers and superiors alike. Mr. Hornick was the obvious choice to be tapped to head a special task force to investigate political corruption in Madera County. Only a highly motivated, detail oriented individual, with proven integrity could ensure a successful outcome of such an obligation.

Whereas so many have fallen short in meeting such measures over recent years, these standards have been the hallmark of Paul Hornick’s career. It is his intention to bring these values to the Madera County District Attorney’s Office.

Paul Hornick currently resides in Madera with his wife Amber.