Hiking to the Fissures, Taft Point and Sentinel Dome

We took a short hike over a pretty easy trail to see some giant cracks in the granite then headed on to experience amazing view as we topped off at Sentinel Dome.

We drove up Glacier Point Rd about 13 miles to the trailhead where the bathrooms are located, which also serves as the trailhead to Sentinel Dome. We then followed the trail to the Fissures and Taft Point.

The Fissures is only about 1.2 miles and a fairly easy walk along a gentle grade. There are no guard rails along the Fissures and there are straight drop-offs of 3,000′, so this is not a place that you want to bring children (or adults) that are not within tight control.

We hadn’t walked very far down the trail when Rick, who just loves geology, spotted a whole bunch of white colored quartz. They were the only rocks like them in this area that is full of granite. 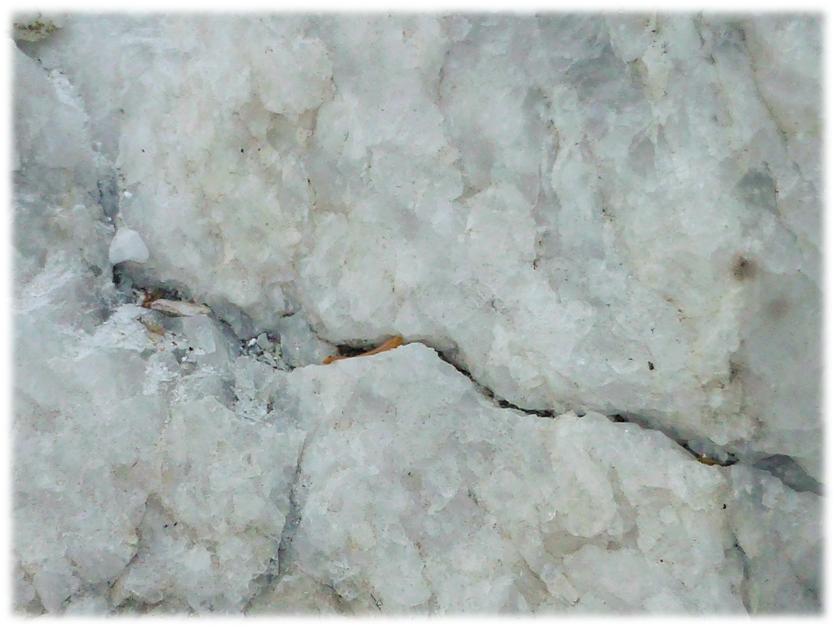 We continued down the gentle trail and were surprised to be greeted by two slow moving deer, munching their way across and beside the trail. We reached the 5 giant vertical cracks called “The Fissures” and explored around a bit. There is no guard rail around these dangerous fissures that drop off about 3,000′ straight to the valley floor. As you begin to catch sight of these fissures, you realize how monstrous they are.

So, what caused these giant cracks? Here is what YosemiteHikes.com has to say (link at end of blog just in case you think I am making this up):

“These immense vertical gashes in the valley wall were caused, it is now believed, by an epic battle between Mothra and Godzilla, during which Mothra slashed at his scaly foe but missed and raked his talons against the cliffside instead. (What, you didn’t know that Mothra has talons? Check with your vet.)” We all took a peek over the side in our own unique ways.I am not that wild about heights, so I pretty much kept my distance. (Photo of me peeking over the side by Gail Gilbert) We headed on up to Taft Point, named for William Howard Taft,who was serving as the President(1909-1913) at the time that Robert Marshall, Chief Geographer for the United States Geological Survey, named it. John Muir guided President Taft through Yosemite for 3 days back in 1909. Did you know that President Taft walked down the four-mile trail from Glacier Point to the Yosemite floor?

It seems the big topic of discussion on that visit was water and Hetch Hetchy. San Francisco wanted that water and had a proposal to dam up the Tuolumne River to create a reservoir out of Hetch Hetchy Valley. John Muir found an ally in President Taft but Congress passed the Raker Act in 1913 which gave San Francisco the right to build the dam and develop hydroelectric power in the valley. Taft lost his re-election to President Woodrow Wilson who signed the bill. Many issues arose regarding Hetch Hetchy but it was eventually completed in 1934.

What a view we had from Taft Point! There is a rail but it was still a bit scary to me to be very close to that edge. It isn’t much of a rail. El Capitan looks a little different from this point of view and we could make out climbers on it. We also could see the Three Brothers, where Yosemite Falls would be falling if there were water coming out of it, Mt. Hoffman, Mount Conness and many of our other mountainous friends. We could also see the Merced River way down there in the valley with reflections.(Photo of me at Taft Point by Gail Gilbert) Now, you can always head back the same way that you came out and back to where you parked but we weren’t done with our adventure yet. Plus this way we could do a loop, seeing some different country and end back at the parking lot. We headed back the way we had come til we met up with the Pohono Trail and took it toward Sentinel Dome. We started heading down the trail, which follows a road part of the way, and were surprised to see a crane heading up our direction. I have no idea what it would be working on but suspect that it might have something to do with the microwave tower located nearby. We made it back to the car and were surprised that the parking lot was full. We were the only ones there when we arrived that morning. We drove up the road a little ways, making a quick stop at Washburn Point, named after Albert Washburn of Wawona. He and two other men, Coffman and Chapman, took over Galen Clark’s Tourist Rest and ranch in 1874. This area today is known as Wawona.

Washburn Point is a wonderful place to view Half Dome, along with Nevada and Vernal Falls. You can also look up Tenaya Canyon and view the tippy tops of some of the higher mountains in that area. When we got out of the car, a raven was sitting on the fence posts and made for a weird silhouetted picture. I didn’t even see the couple at the bottom until I downloaded the picture. I am going to share with you another of my secret picture taking spots. At the far north side of the paved viewing area, there is a big rock. If you sit on top of that rock and crop the bottom part out, it looks like you are on a rocky cliff across from Half Dome. It makes for a nice picture no matter which side you frame yourself with the Half Dome backdrop. Hiking From Bridalveil Campground With Wildflowers and Bugs History Mystery #89: The Case of the Mystery Mining Machines