Home » Blogs » Winery-Sage: A Match Made In Ireland Winery-Sage: A Match Made In Ireland

St. Patrick’s Day usually conjures up images of Irish Whiskey, Guinness or green beer (bizarre tradition by the way – sticking food coloring in your beer so that it becomes a radioactive green). If you think that St. Patrick’s Day is only about drinking (probably not too far from the truth for many of our readers – yes, you know who you are), it’s about food as well.

Traditional Irish cuisine is a great match for Guinness but it’s also a great match for wines as well. What’s that you say? You think “traditional Irish” and “cuisine” don’t belong in the same sentence? Well, you could be wrong. Irish food has undergone a renaissance of sorts with an emphasis on fresh ingredients direct from the farm. If your view of Irish food is English only worse, you are in for a big surprise.

We’ve chosen a number of modern Irish meals that pair wonderfully with wine. Keep an open mind and give them a try. 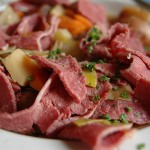 Thoughts of food on St Patrick’s Day usually start (and sadly end) with Corned Beef and Cabbage. Frankly I can’t stand cooked cabbage so we’ll focus on pairing wine with the star of the dish, the Corned Beef.

Pairing wine with Corned Beef is a little trickier than it first appears. Corned beef is made from brisket and, other than a large fat cap across the top, the meat doesn’t have a lot of marbling. Given the bright red color, the first thought might be to go with a big Cabernet Sauvignon or Syrah but, often, some of the fat is rendered out in the cooking process. So, avoid the bigger, tannic wines like Cabernet Sauvignon. We suggest: 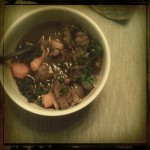 This dish is often cooked with Guinness, which imparts a rich smokiness to it. Yes, we know this is a blog about wine but man doesn’t live by wine alone and we have a soft spot for Guinness (our black lab is even named Guinness). That being said, there are some great wines to accompany a traditional Irish Stew.

The normal rule of pairing wine with a meal is drink what goes into the food. For example, if you cooked with a Burgundy, drink a Burgundy. This is a wine blog however, and drinking Guinness with this stew may be an easy recommendation (tasty as well) but pretty much screws with the idea of recommending wines. I’d go with a medium body Red with this dish. 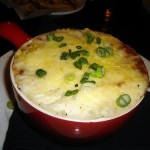 To me this dish screams rich gravy. The lamb or beef is likely to have a little more fat than the first two dishes so you want something with some tannins. A Cabernet Sauvignon, Syrah, or a Nebbiolo would be quite tasty.