NORTH FORK – The Willow Fire ran another half-mile to the south in the last 24 hours, continuing it’s push across Peckinpah Mountain, and running to the east toward Whiskey Falls. The fire stayed mostly to the top of the mountain, and didn’t come down the slope.

There was also a fairly healthy run on the northern perimeter in the Sand Creek area, but after the sun went down and the winds shifted to down-canyon, the fire came back on itself, and crews held it to the east side of the creek.

There is still a fair amount of open fireline in Division C (see map below), and there is the potential for the fire to jump to the west side of the creek, though there are areas of fuel treatment projects there which could modify fire behavior. 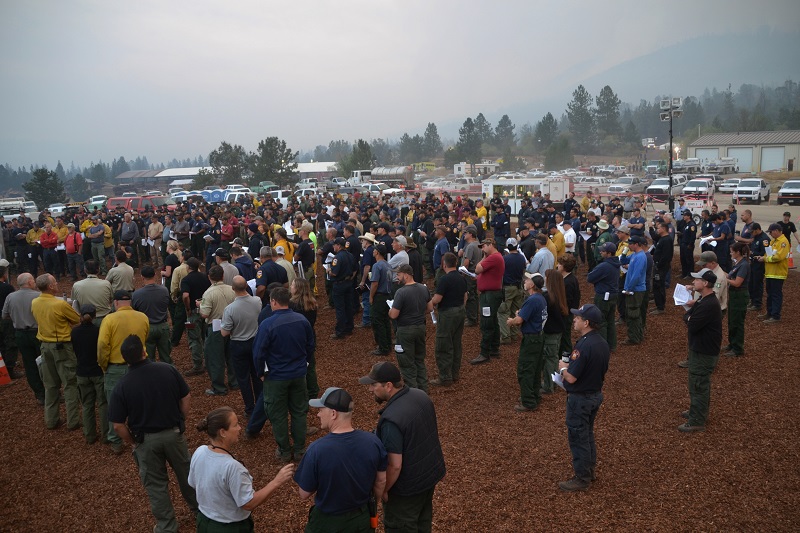 The Willow Fire is now estimated at 3,383 acres with 30 percent containment. Resources continue to arrive at fire camp, are there are now nearly 1,800 personnel assigned to the incident.

A dozer line has been completed from Peckinpah Creek, just to the northeast of the Old Mill Site in North Fork, to the top of Peckinpah Mountain. Crews are doing some backfiring along this line to remove fuel between the line and the advancing fire, to protect Cascadel Woods, which was ordered to evacuate at 8 a.m. today, along with Douglas Ranger Station Road.

Firefighters are assessing and preparing to defend structures in the Cascadel Woods area, in Central Camp and along Douglas Ranger Station Road.

In Divisions A, B and M (see map below), things are pretty quiet, with little to no fire activity. Crews are doing patrol and mop-up in those areas.

The forecast calls for continued very dry conditions with poor relative humidity recovery overnight, and only 13 to 18 percent humidity during the day. Thunderstorms are expected to develop later in the afternoon over the Sierra, but that may mean dry lightning, or outflow winds as the clouds build, which would only exacerbate already difficult conditions for firefighters.

Crews are reminded once again that conditions are lined up for some very active fire behavior throughout their shift, with a significant potential for crown fires and spotting in the decadent brush and heavy downed fuels.

In addition to the dangerous conditions in which firefighters are working, the dangers of dehydration are also serious as temperatures reach into the high 90s. They are also dealing with large amounts of poison oak, and or course, rattlesnakes.

Yesterday was a very busy day for air operations, with all the Type 1 helicopters using up all their permissible time in the air. Today will be another active day for air resources, with 9 helicopters working the fire, along with 4 air tankers available, and the welcome return of the VLAT DC-10

The Willow Fire started on July 25 at 2 p.m. and is burning east of Bass Lake and north of North Fork, Calif.