Wildflowers and History Along Beasore Road

I steal some of my best adventure ideas from my friends and some of them had recently been venturing up Beasore Road to see the wildflowers with a stop by Jones Store. So that is what I did . . or tried to do. Old newspaper articles help tell the story of the early days up here before Beasore Road existed.

I headed out of Oakhurst east on Hwy 41, then took Road 222 toward Bass Lake. Just before I reached Bass Lake, I kept left onto Road 274 for about 7 miles. Just a smidge past where you can take the road down to The Pines Village on the right, Beasore Road is on the left and heads uphill. I basically followed it for about 20 miles until it ended where the bridge is out at Chiquito Creek.

Packing some snacks and cold drinks, I also brought along a wonderful resource, a book called Exploring the Sierra Vista National Scenic Byway by Roger & Loris Mitchell. I didn’t do the drive as they described in the book but in an opposite way and only along the Beasore Road portion. It is jam packed with all kinds of interesting history, pictures and facts by milemarker!

I hadn’t driven too far up the road when I saw many giant mountain dandelions (Agoseris grandiflora). A big thank you to Joanna Clines, Sierra National Forest Botonist, for identifying it for us and sharing that it is a native plant as opposed to the non-native shorter type of dandelions that we often see in lawns and meadows. Wildflowers such as Bigalow’s Sneezeweed lined the road in some spots. When I started to get closer to Beasore Meadows, I could spot different types of wildflowers such as lilies, lupine and columbine along the road in the green grass. 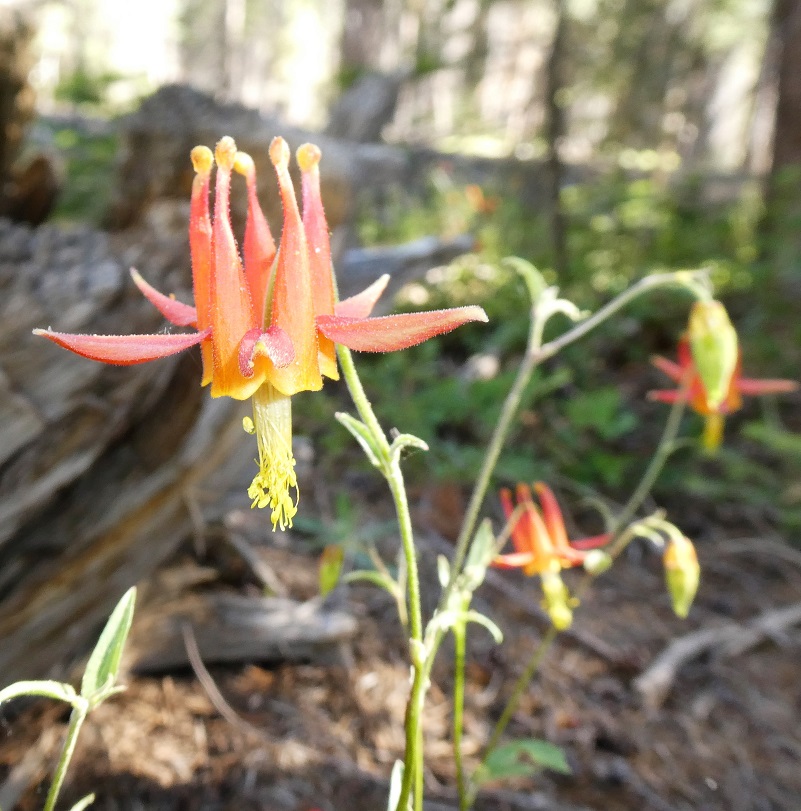 You may be wondering how Beasore Meadows got its name. There is some wonderful information in Exploring the Sierra Vista National Scenic Byway on this.

Designed to encourage western settlement, the Swamp and Overflow Act was passed by Congress at the same time California was admitted to the Union, making an easy way for old-timers to obtain acreage. Using a team of horses to pull a flat wagon with a boat on it, they would drive through the lush meadows, vouch that they had traversed the area in a rowboat when filing a claim on the land, and it then belonged to them. That is how the private land at Beasore, Arnold and Jackass Meadows was acquired.

The names Beasore Meadows and Creek show up on the early topographic maps of the area. I located homestead records for John Potter Beasore who was born November 18, 1827 in Ohio but I did not easily locate the land records online for the Beasore Meadows area. BTW, I searched alternate spellings that included Basore. 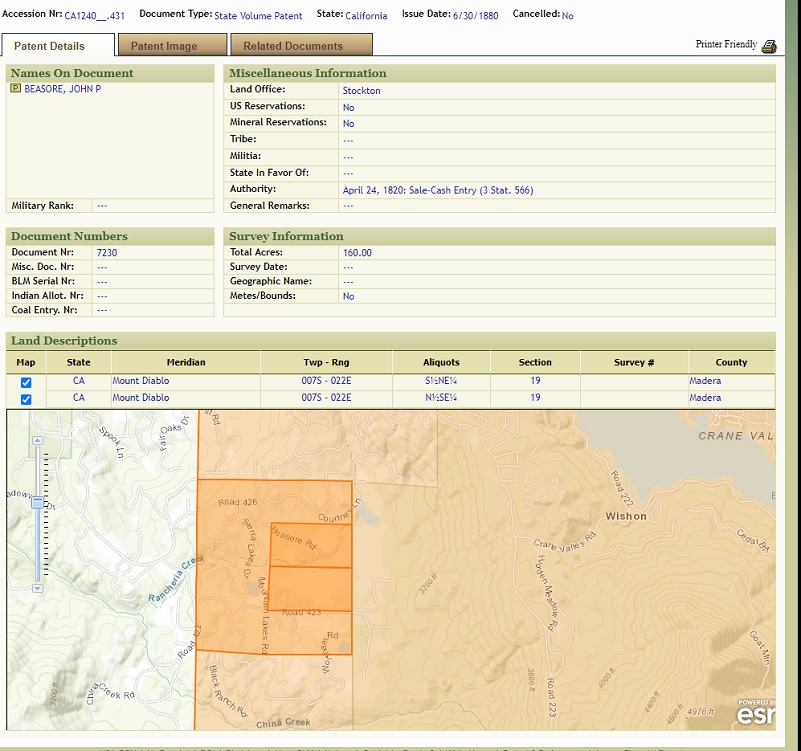 I tracked John Beasore through the years. He consistantly voted and that gives us a description of him as 5 foot 7 1/4 inches tall, dark complexion, blue eyes and brown hair. He identifed himself as a Democrat and showed his residence as Fresno Flats and Crane Valley. His occupation varied as Farmer and Lumberman.

Tracking him on census showed him living in Monroe, Richland Co., Ohio in 1850 but by the 1860 census he was working as a blacksmith, living at Millerton. Jim and Cholette, Indians, were living in his household. In 1860, his son, Thomas was born. Early census indicate Thomas’s race as white but later census indicates his race as Indian. I was unable to locate marriage records for John but the 1880 census says that he is a widower.

John died June 5, 1915 in Madera County and is buried at Oakhill Cemetery in Oakhurst. I do not know where the title of Captain originated. I did not locate Civil War records for him although there is a person with the same name, same year that had a record but it shows that he is buried in Ohio. And of course, there is more to the story. More about his son Thomas later on. I continued on up the road where were plenty of purple wildflowers such as lupine and larkspur. Barriers and Road Closure signs marked the end of the road about .7 miles above the Chiquito Creek Bridge. Although the project was planned to start in June 2020, the 379,895 acre Creek Fire that year changed those plans. I don’t have an construction update for you but there was a piece of equipment near there so they are or were doing some work. I walked down to check it out. If you are planning on driving the entire Sierra Vista National Scenic Byway, you will need to make a slight modification with detouring to bypass this area. If you were wondering how this creek received its name, here is what Yosemite Place Names says:

I continued up the road where the cows looked pretty happy about grazing that lush green grass. The road led back down through Muglers Meadow. Thanks again to Exploring the Sierra Vista National Scenic Byway, I learned that it was named for Christopher Mugler who was a Merced River sheepman who used it as his base camp each summer. I spotted a few different flowers that I had missed on my way up. I soon reached Beasore Meadows and swung into Jones Store, open only seasonally. There isn’t any electricity here and your cell phone won’t work, also no landine here. But there is a small store here and what most people know it by is their hamburgers and homemade pie. Beasore Meadow has been in the family since the 1800’s and after the road that we now call Beasore Road was built, Tom Jones built an old western front store.

Tom Jones passed away April 17, 1956 and his descendants still operate the store today.

It was a very sad day when I discovered that the store was closed on my visit. No pie for me on that day. 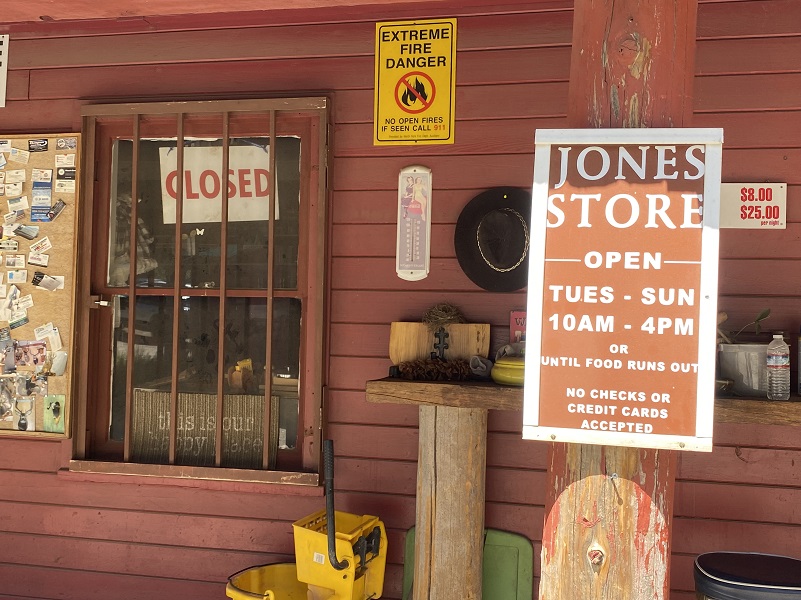 OK, you are probably trying to figure out how Tom Jones fits in with the Beasore family. I located a wonderful article that was written by Grace Grady for the Sierra Star, republished by the Fresno Bee September 10, 2004. She interviewed Tom Beasore who tells the story better than I could. After my disappointment at not having pie, I continued my drive back down the road, seeing more flowers that I missed on my way up. I think this is Hackelia munula; Pink Stickweed. As I passed Cold Springs Meadow, I decided to go ahead and park up at the summit then walk down along the road to better check out the meadow. 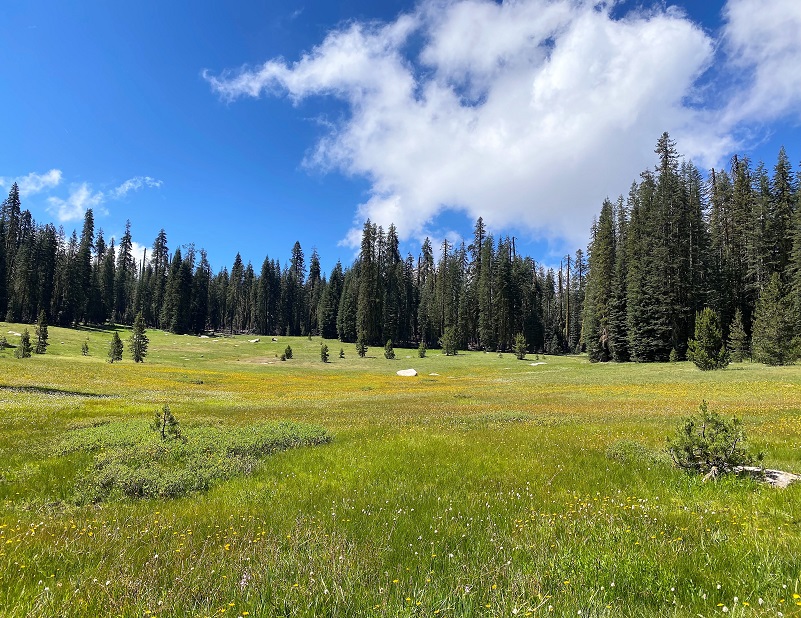 Back in the car and lower down in elevation, these plants which are a member of the mint family, were blooming like crazy and they smelled wonderful when I ran my hands through the plant. The last flowers that caught my eye on the way down were a few wild azaelas along the road. My drive was on a paved road but just imagine the excitement when this brand new road opened up in 1925. Quite a bit different than my adventure, but sure happy that the Fresno Morning Republican captured it! Sorry about the blurriness but that was as good as I could get it. It took me about a half of a day to drive this, taking my time to stop and check out flowers along the way. Also wanted to share that I have been using the free Seek by iNaturalist App to help identify plants that I am not sure of and it has been fun using it.

CALTOPO has some free options for mapping and here is a link to my adventure this week: CALTOPO: Driving Beasore Road to Chiquito Creek

You can download this wonderful map to give you higher quality from the Sierra Vista Byway’s Home Page.