"It is very important to us that people know we appreciate their business and are honored to provide their water needs," says Chris, with Bobbie and son Otis, 18 months. Whether it’s a new well that needs drilling or an older well that needs fixing, those words have been spoken nearly countless times in these foothills when it comes to the tricky business of getting drinkable water up and out of the ground. Now, it’s time to say, “congratulations!” as Walt Bannon Drilling celebrates an impressive 80 years in business.

The company has always been family owned and operated, and was founded by its namesake in 1936. In addition to family members, the company now employs several full and part-time employees between office, pump, and drilling. On average, the firm drills 400 feet in a day with a two man drill crew. Originally, Walt’s wife Juanita ran the office and their kids were put to work early on. Youngest daughter Sunny helped in the office after school, weekends and summers.

In the early 70s Sunny and husband Russell Duncanson returned to work in the family business. In 1982, Russell and Sunny purchased the business, allowing Walt and Juanita to retire after 45 years.

Chris Duncanson, Russell and Sunny’s only son, has also worked in the family business his entire life. Chris started pulling stem and digging trenches on summer breaks from school when he was 12. When Chris graduated high school he started working full time. 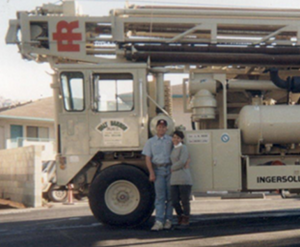 Chris took on more and more responsibility of the business from his father, Russell. In January of 2016, Chris purchased the company from his parents, allowing Russell and Sunny to retire after 34 years of ownership. Chris is now the third generation owner of Walt Bannon Drilling and, with him, Bobbie Evans runs the office just as Juanita once did.

“I am very proud of what my grandfather and father have done and have allowed me to do,” says Chris. “Everyday I get to go do what they did. I pull pumps that my dad installed in the 1980s and the customer will be there and tell me a story about when my father was installing that same pump.”

Or, he says, when he deepens an old well from the 1960s that Walt drilled and Chris knows that the last time someone was drilling on that well, it was 40 years ago, and it was his grandfather standing in the same spot, running the same type of machine.

“It’s an amazing thing that I’m not sure I can fully explain,” says the multi-generation driller. Originally based in Mariposa County, Bannon’s operations were moved to Oakhurst to be more centrally located for their service areas of Eastern Mariposa, Madera and Fresno Counties.

When Walt first started in 1936, Chris notes, they were limited on the depth they could because of the equipment that was available.

“He started with a cable tool rig and once they hit bed rock it was real slow going, about 10 feet a day.” Walt’s original drill rig was reportedly purchased second-hand $3000.

Currently, the price for a new hard rock drill rig would be approximately 1.2 million dollars, Chris explains, but in 1936 it would have been a cable tool rig that was not very complex nor very expensive.

In the 1950s Walt purchased his first air rig which could then do hundreds of feet a day. Modern air rotary rigs, specifically, are able to drill 400 feet of hard rock a day. Back in 1976, Walt told a reporter that he’d already drilled an estimated two million feet of hole. Chris says that number has at least doubled, estimating the company has drilled a total of four to five million feet by now.

Early on, Walt saw the value in accurate recording keeping and well-logged information, and today the company says it holds the most documented information on local wells and water systems available, with records dating to the early 1950s.

The most shallow well the company has ever drilled, for instance, would be about 30 feet, Chris says, while the deepest they have done so far is 1600 feet. These records are not only a valued source of information for individuals, researchers and government agencies, but a proven aid for determining well site locations and estimating well depth and flow.

The average depth of a well these days is 600 feet, says Chris, and that is changing.

“It has gotten deeper over time. When my grandfather first started, 100 feet wells were the normal depth. There was a lot more shallow water because there was little population and, over time, that has changed and the wells have gotten a lot deeper as more demand is put on our communities.”

The drought has brought in work both on the drilling side and the pump side.

Fires, too, have taken their toll. “A lot of the water being used to fight fires is coming from wells we have drilled over the last 80 years. Also, we have to do a lot of repairs on well systems after fires, the controls and wiring and piping and even sometimes the well head itself gets burnt up.”

Chris continues to follow his grandfather Walt’s commitment to making customer satisfaction a priority, and to providing safe, reliable water at an affordable price, right here in the foothills where his family has labored so long. Chris and Bobbie have an 18-month old son Otis and, while it’s a little too early to place bets on what his future career may be, a dad can dream.

“I want my son to do whatever he wants but if he is interested in well drilling which, if he is anything like me, he will be, then of course I want him to follow what three generations of his family has done. It’s great work that we are very proud of. It is very important to us that people know we appreciate their business and are honored to provide their water needs.”