Saving The Little Church On The Hill

OAKHURST – The Little Church on the Hill stands in quiet, simple elegance in the Oakhill Cemetery along Highway 41 in the town of Oakhurst.

It has borne witness to the joys of weddings and baptisms, the fun of Sunday picnics and Easter egg hunts, and served as the spiritual and social center of a fledgling community for many years.

Built and consecrated as Christ Church on June 20, 1894, the Little Church was the first house of worship in what was then known as Fresno Flats, and met the needs of all denominations for 61 years in its spot on Chapel Hill. As new churches were built in the town that was to become known as Oakhurst in 1912, the simple little church on Road 425B quietly faded into history, and held its last worship service in 1953.

In 1957, the Episcopal Diocese wanted to move the abandoned building to Avenal, but feared it would not survive a long, hard trip across the San Joaquin Valley, says the story on savethelittlechurch.org.

Mountain residents became alarmed at the possibility of losing the church and banded together under the leadership of Grace Schneider and the “Grandmothers Club” to find a way to keep the church in the community.

On March 11, 1957, an agreement was signed in which the Episcopal Church gave title of the building to the cemetery district. A site was provided in Oakhill Cemetery, and the Little Church was moved and set up on the new foundation where it sits today. 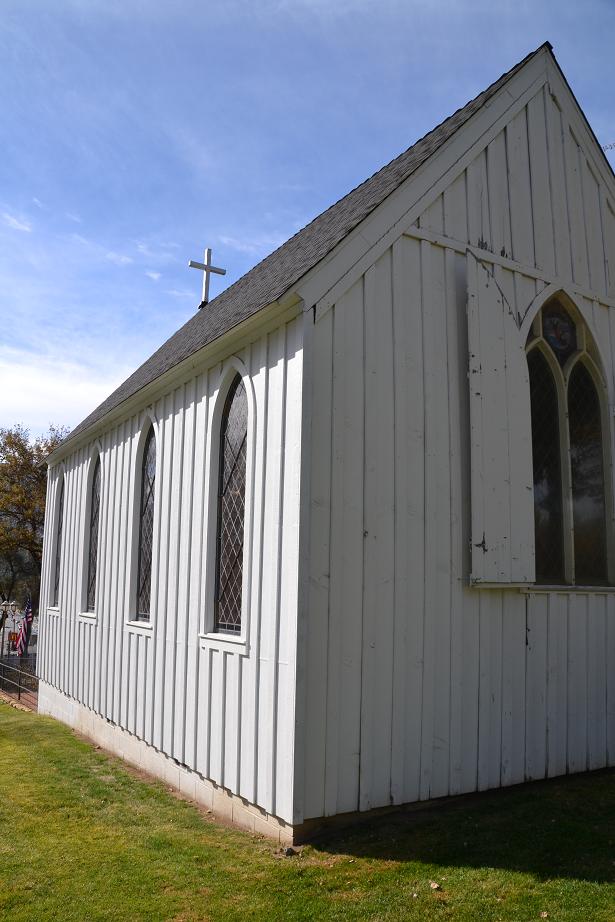 The passing of years and the effects of the elements have taken their toll, and now the Little Church on the Hill Foundation, formed in 1994 as the church turned 100 years old, is on a mission to restore this beautiful local treasure.

The Little Church on the Hill needs replacement of three outside walls on the west, north and south sides of the building with woodpecker-proof siding. The east wall was completed in 2011. There are also plans to restructure and reinforce the bell tower, retrofit the stained-glass windows with custom framing, remodel the front and back stairs for safety, remove and re-pour the cement to improve the approach from the blacktop, and add gutters to the roof. The goal is to raise $30,000 to complete the remaining work. Working with web consultant Tina Lindeman of CRG Hosting, the Foundation plans to develop a web-based promotional campaign to receive direct donations and offer the public the opportunity to purchase limited edition prints from the 1957 photos by Wally McRae when the Little Church was moved off Chapel Hill.

“We want to finish this last stage of restoration in 2013 for several reasons,” says the Foundation. “The two contractors who did the east wall are still available and each gave us substantial discounts to help with our financial limitations. We do not want the cost of materials to escalate any further than necessary.”

Through the work of local citizens, volunteers and the dedicated members of E Clampus Vitus Grub Gulch Chapter, much has been done to restore and maintain the Little Church over the past 120 years. Now the Foundation is asking the community to help through financial donations to complete the needed work and save the church for coming generations to enjoy.

In the years 2005 – 2007, the church reportedly had visitors from 23 foreign countries, 93 California cities and 24 other U.S. states. In one 10-month period, there were more than 600 visitors to the Little Church on the Hill.

Most recently, the church was festooned with an Avenue of Flags as Veterans Day was celebrated to a standing room only crowd on Nov. 11. The Little Church on the Hill can be visited Monday – Friday during business hours. It is still used for weddings, baptism, memorial services and church services.

To learn more about the Little Church, it history and the restoration projects, or to donate to the cause, please visit SaveTheLittleChurch.org.