NORTH FORK – Road 200 was closed for nearly 90 minutes on Monday, June 2, after a truck rolled over in front of the St. Joseph the Worker Church, about a mile outside of North Fork.

At 8:39 p.m., Austin Kerns, 42, of North Fork was westbound in a 2007 Dodge Ram 2500 flatbed pickup when he lost control due to what CHP notes was his high level of alcohol intoxication. The truck veered onto the right shoulder and went up the embankment, causing it to overturn as it traveled back into the roadway. It came to rest on its roof, blocking the right lane and scattering debris and fluids across both lanes.

Due to the fact that he was not wearing a seatbelt, Kerns was partially ejected from the vehicle, and sustained major facial contusions. Other motorists who came upon the scene reportedly found him lying in the road near the overturned truck. Calls to 911 said the accident victim needed “immediate help.” Road 200 was shut down in both directions as Sierra Ambulance personnel evaluated the driver, got him stabilized and ready for transfer, and CHP conducted their investigation. After the driver’s injuries were assessed, SkyLife air ambulance was dispatched and firefighters moved to the North Fork School to set up a landing zone.

Kerns was airlifted to Community Regional Medical Center with what CHP noted as major but not life-threatening injuries. He was conscious during the transfer from the scene of the accident to the helicopter. 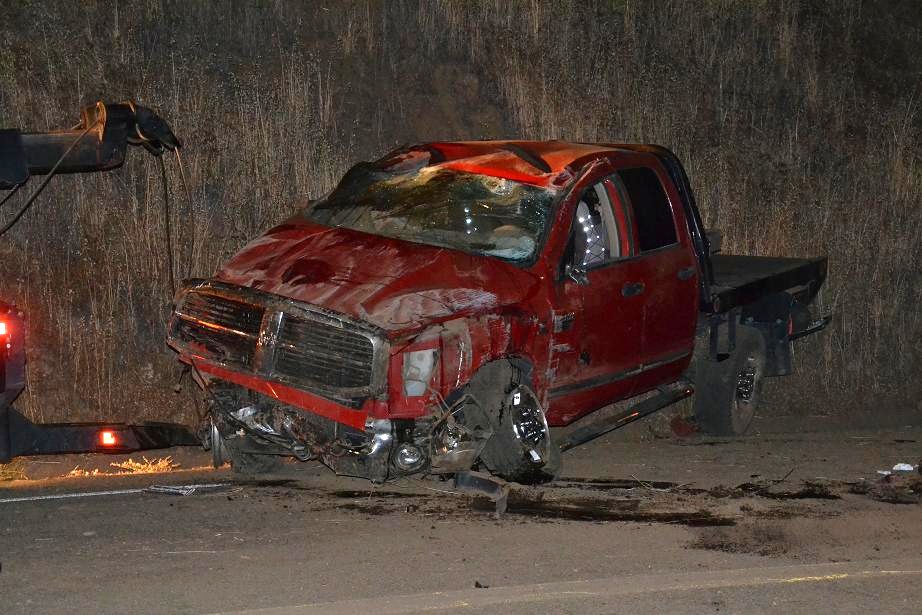 Bulldog Towing and firefighters cleared the debris from the roadway, which was reopened at about 11 p.m.

Kerns was subsequently arrested for DUI and was released to the hospital due to his injuries.