We headed up Highway 41 through the South Entrance to Yosemite near Mariposa Grove, then up Glacier Point Rd. We continued about 9 miles to the wide parking area that is just off the road on the right hand side, just past where Glacier Point Road crosses Bridalveil Creek. Normally there is a sign that says “Ostrander Lake” on the road where you turn into this parking lot but the sign was missing on this visit. Ostrander Lake is the primary source of Bridalveil Creek, which feeds Bridalveil Falls. I have found 3 different stories about how Ostrander Lake got its name. Wikipedia says that the lake is named for a descendant of Alexander Ostrander (1783) of Smithfield NY and that this branch of Ostrander family settled in Colorado (Georgetown, Granby, Hot Sulphur Springs, Golden) prior to 1872, some moving from Colorado to California. As we continued up the trail, we walked along a small creek. Where the creek was wide and slow moving, we saw some very pretty reflections in the early morning light. We always see something unexpected on our hikes and after we topped out on “Heart Attack Hill,” we heard a dog barking. Just before we dropped down to Ostrander Lake, we saw two people camping off of the trail and they had a German Shepherd that was running after a party of 3 hikers that had been ahead of me. The party ahead of us had gone down to advise this group that dogs were not allowed in this area of the park.

This area is designated as a Wilderness area and dogs are not allowed. I wasn’t party to the conversation that took place between the dog owners and the hiking party so don’t know if they were aware of the rules. Here is a link to those rules regarding dogs in Yosemite National Park to make it easy for you. As soon as we could see Ostrander Lake, we headed down to it, walking along the right side. Glaciers formed Ostrander Lake long ago, leaving a beautiful lake in a cirque that is surrounded on one side by snow-covered Horse Ridge. This created a gorgeous backdrop for this lake that usually has beautiful reflections of the ridge in the waters.

The wind was blowing pretty steady so we didn’t have the amazing reflections in the lake that we usually have but on a couple of occasions the wind backed off a little bit, so we took advantage of this to take pictures. (Picture of Rick with his red hat by Gail Gilbert) It was originally intended to be part of a larger system of winter trails and huts along the Sierra Crest that never were developed. It is operated by the Yosemite Conservancy, a non-profit educational organization in Yosemite National Park and is staffed with a hutmaster during the winter months. Since we had time, we decided to head up to Hart Lake. Although this sign indicates a trail, it was not always easily seen on the ground. Ducks, or cairns were evident in some portions but we were navigating with our GPS and didn’t always follow the trail. We passed several very pretty tarns along the way. The frogs were really singing up a storm in the afternoon when we passed back by these. 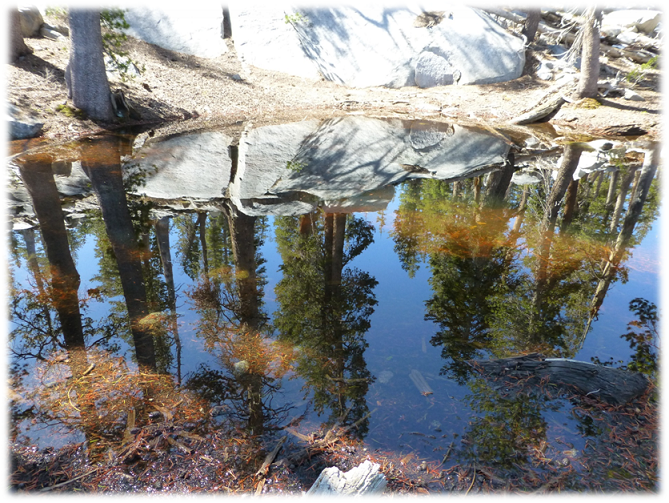 We reached a high point where we could look up toward Half Dome, Tuolumne and Mount Conness. Love that country but wow, the lack of snow was so startling. We headed farther toward Hart Lake but we didn’t make it down to the lake. We had a little glimpse of Hart Lake from the top of a ridge and it looked beautiful. We had run out of time and needed to head back. Being on top of this ridge gave us the best view we had ever seen of the Merced Peak, Red Peak, Gray Peak and Triple Divide Peak. These are Peaks at the southern part of Yosemite. It was a great spot to take a panoramic shot. We went through a “Pirates Booty” phase, then a “Food Should Taste Good” phase and now we are in a “Half Pops” phase. Each of us has our favorite beverage of choice, some caffeinated, others not. Rick had brought Cinnamon Buns from Starbucks this morning which were a real treat and I saved mine for the ride home. Mmmm.