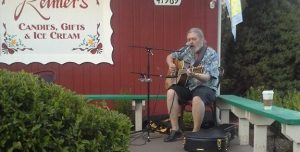 OAKHURST — Thanks to a retired archaeologist who loves to sing and strum and is always willing to dig up the right kind of talent, there’s a couple of places every week where singers, songwriters, poets and others can express themselves.

Stephan Baldwin has lived in Oakhurst for eight years, but he’s been playing guitar and singing folk songs for over 50 years, he says, though mostly as an amateur.

Stephan hosts two Open Mics night; both are free for attendance and participation, and any and all are welcome to perform. “There are no rules other than a time limit of three songs or poems,” says Stephan. “This is to give everyone a chance to perform. Some evenings, depending on the number of participants, we may do a second round of songs or poems.”

Yosemite Open Mic is generally well attended and audience members, along with performers, have a great time in one of two very supportive settings.

“The audience varies from night to night,” Stephan notes. “During the summer season we do have a lot of tourists, as well as locals. There are two venues. The first is on Saturdays from 6 to 9 p.m. at Reimer’s Candies and Ice Cream. Weather permitting, we set up to play on the lawn and, if raining, then inside of Reimer’s.” Kids are more than welcome at Reimers, where you’ll want to bring your lawn chairs and blankets for maximum comfort.

The second incarnation of Yosemite Open Mic takes place at The Queen’s Inn every Tuesday, also from 6 to 9 p.m., in their outdoor wine and beer garden where the clientele is 21 plus, with an adjacent area for younger people.

“I see these Open Mics as an opportunity for those with songs or poems to share them with the community in a warm, relaxed and a very welcoming setting. We have some who have never performed in public and some who have played professionally, and everything in between, with ages from 17 to 70.”

Most of the musicians are acoustic guitarists, Stephan says, adding that electric is fine, as well. He emphasizes that the stage is open to all.

“For me, and for the regulars that share their music, it is a labor of love. No one is paid, but we all welcome the opportunity to share a love of music with the community.”