Lost and Unprepared in Tenaya Canyon 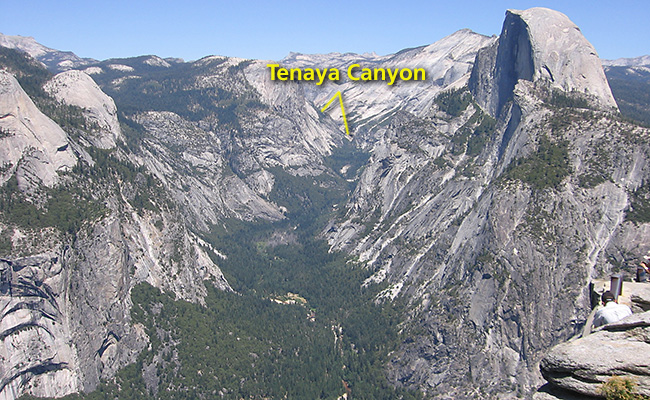 On Sunday, June 30, at 11 a.m., the leader of a climbing club staying at Camp 4 in Yosemite Valley contacted the Yosemite Emergency Communications Center, reporting that two members of his club were overdue.

The two hiker-climbers, one male and one female, had started their journey on Saturday, June 29, with the intention of hiking, scrambling, and down-climbing through Tenaya Canyon to Yosemite Valley in one day.

The male hiker-climber had prior climbing experience. The two hiker-climbers did not intend to rappel, so they didn’t pack a rope. When they arrived at the first of four rappel stations, they discovered they, in fact, couldn’t safely scramble down the canyon route.

They decided instead to scramble away from the rappel station, up the northwest canyon wall, and traversed along the northwest side of the canyon along a bench, then eventually descended back down a shallow gully through second-class terrain (relatively easy scrambling); they more or less paralleled Tenaya Creek, which was far below them.

They stopped when they became ledged out (stranded), and spent the night in what had become fifth class terrain (terrain usually associated with technical rock climbing). 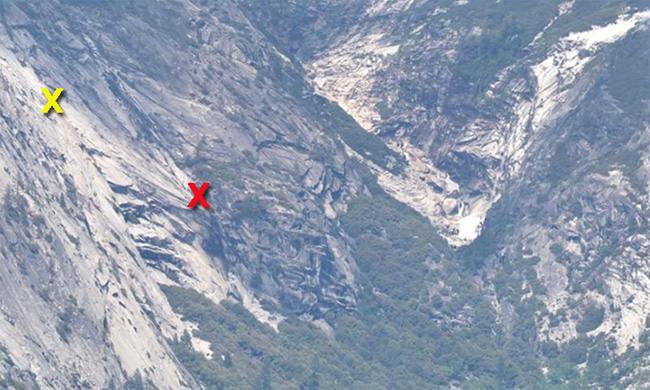 By the time Yosemite Search and Rescue (YOSAR) became involved the following morning, the two individuals were stranded in separate locations, about 500 feet apart (red “X” marks the location of the female, yellow “X” the male).

At some point either later on the first day or on the morning of the second day, the male hiker-climber had decided to continue west, ascending a low-fifth-class granite slab, scouting for a possible route out of the canyon. He reached a point where there was no possible route down, and no way to return the way he had come. The pair had one cell phone between them, and the female hiker-climber, who didn’t speak English, had kept the cell phone with her, which introduced a language barrier to the situation. 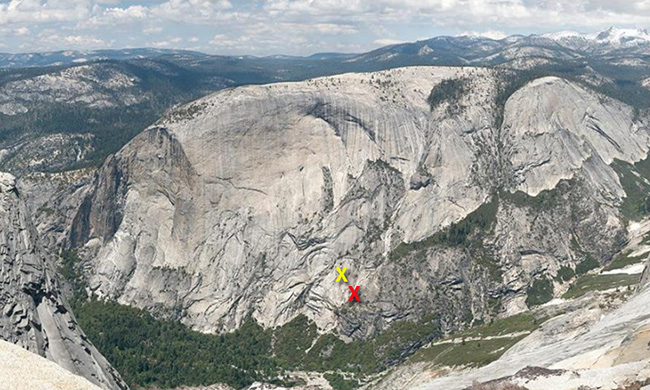 Going on the location information provided by the club leader, two Tuolumne Meadows SAR team members headed down Tenaya Canyon, searching for the missing hiker-climbers. The two searchers descended all four rappels but were unable to locate them.

When the two SAR members were unsuccessful in locating the missing parties, the incident commander asked the climbing club leader to again call the hiker-climbers’ cell phone and to again instruct them to yell, in the hopes that the searchers would be able to hear their shouts. As luck would have it, other members of the Tuolumne Meadows SAR team had chosen to spend their day off (Sunday) journeying down Tenaya Canyon, initially having no idea that a search was underway.

The two original searchers met up with the other members of their SAR team, and they all listened for shouts. The group heard faint cries but could not pinpoint the location. The off-duty SAR team members decided to continue down Tenaya Canyon canyon, as planned, and in doing so reached a location where they heard, and then saw, the hiker-climbers at approximately 6 p.m. The two original searchers then scrambled up the northwest canyon wall in the direction of the hiker-climbers, with the intention of hiking them out if possible.

Because of the faulty information the incident commander was given in the morning about the location of the overdue hiker-climbers, the two searchers were equipped only for rappelling through the canyon, and not for climbing. Without proper climbing gear, the searchers’ progress toward the stranded parties was hampered, and daylight was waning. The incident command team decided that a rescue by helicopter was in order.

With dusk fast approaching, Yosemite Helitak prepared the park helicopter, Helicopter 551, for a mission to rescue the stranded parties, while two park rangers in Yosemite Valley suited up to be short-hauled to the hiker-climbers’ locations.

At approximately 7:30 p.m., Helicopter 551 short-hauled the two rangers to the location of the female hiker-climber. From there, one ranger climbed, with the other belaying him, to the stranded male hiker-climber.

By 8:20 p.m., the rescue mission was complete, with both the hiker-climbers and the two rangers safely back on the ground at Ahwahnee Meadow in Yosemite Valley. The overdue hiker-climbers were dehydrated and exhausted, and were completely out of water. 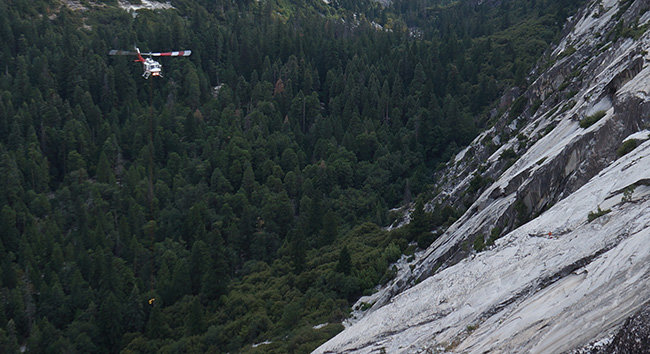 The two hiker-climbers were fortunate to have cell phone reception; without it, they may have risked trying to climb down and/or out from their stranded positions on their own, without any climbing gear. Keep in mind, however, that although cell phone reception is common within some areas of the park, reception still tends to be spotty and unreliable, and depending on it for a rescue is not a good idea.

Instead, when you venture into the unknown, make sure everything you do is reversible; whether hiking, scrambling, or climbing, do not go past the point where you could backtrack if need be. In treacherous terrain, always think about the consequences before proceeding farther. If you are in a situation where you are calling 911 for help, report your location by explaining, as best you can, the route you took to where you are and by describing the actual landmarks you can see.

To ensure any journey, even a simple day trip, into Yosemite’s wilderness is safe and enjoyable, adequate preparation is essential. At a bare minimum, bring a map, plenty of food and water, a headlamp, and extra clothing. For both this incident and the Indian Canyon incident, a whistle would have come in handy.

Doing research ahead of time on the terrain you’ll be traveling in, the route you want to take, and the equipment you’ll need is important. A trip into the unforgiving terrain of Tenaya Canyon, in particular, should not to be taken lightly; careful planning and preparation is critical. You must be a proficient rappeller, with the equipment and skills to rappel in difficult circumstances, including in waterfalls.

Required gear includes: a climbing harness, a rope, and a helmet. Be prepared to spend the night out unexpectedly. Throughout the summer season, the exposed, southwest-facing terrain of Tenaya Canyon makes it especially hot, so bring plenty of water and sunscreen.

Additionally, the canyon can experience flash floods; check the weather forecast before you go, and do not attempt the trip if storms are forecast or if you see clouds overhead. For your first trip through Tenaya Canyon, consider going with someone who has already been through the canyon before. 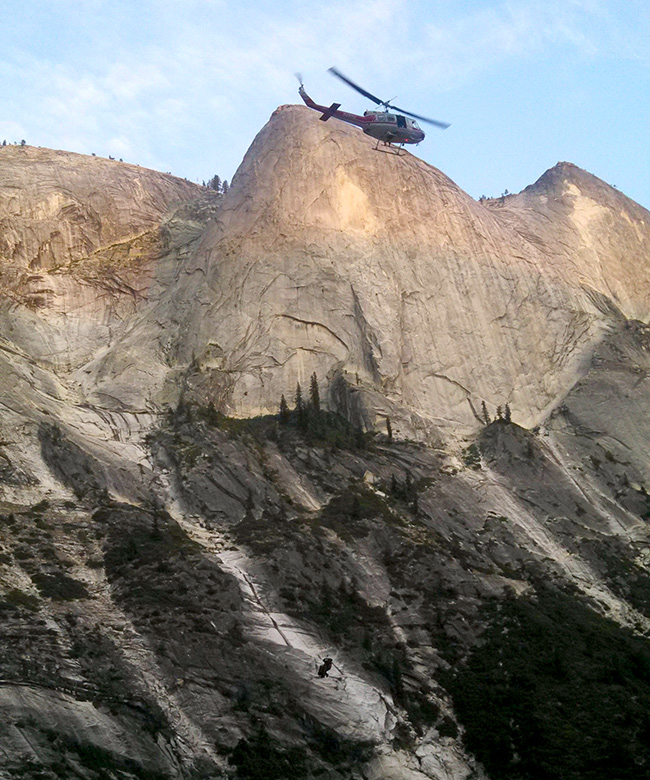