MARIPOSA – If you’ve been looking for your dream house – that is, dream playhouse – it’s not too late to find it.

This is the final week of raffle ticket sales for a beautifully designed and built Lawson Construction Playhouse, with tickets selling for $10 each and all proceeds going to benefit Court Appointed Special Advocates (CASA) of Mariposa, serving abused and neglected children.

Fans will get a chance to see the Dream Playhouse ride in the Butterfly Festival Parade in downtown Mariposa on Saturday, May 3 starting at 11 a.m. Look for the playhouse to be thoroughly adorned with beautiful decorations as though magical birds and tasteful faeries had been given the task of creating curbside appeal. “Win a playhouse – support a child,” is the idea behind the playhouse raffle, which began late in 2013 and ends on Sunday, May 4, when the lovely lemon-colored child’s delight is given away to one lucky person at 3:30 p.m. in front of WestAmerica Bank, following the final two days of display at the Mariposa Butterfly Festival.

CASA of Mariposa County teamed up with local builder Lawson Construction last year, with the goal that all children in Mariposa County have a safe, loving and permanent home, according to organizers. The community can help with the purchase of a $10 raffle ticket that supports a good cause and gives the ticket holder a chance at a playhouse that those in the know agree is “awesome.”

Raffle tickets are available at the following locations: 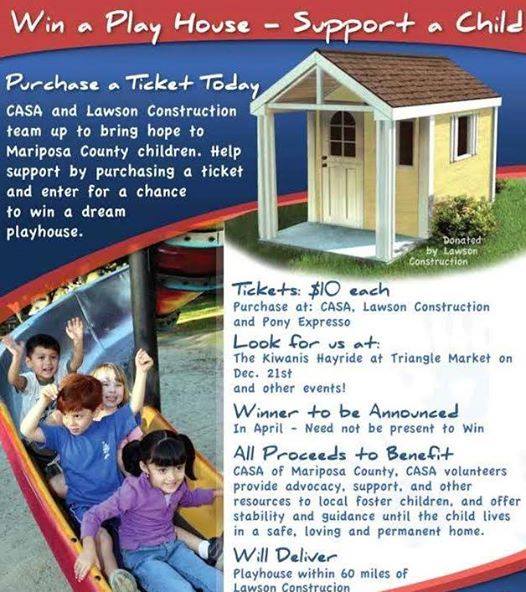