How To Grow Happy Hosta

Our gardeners are weighing in with why they love hosta, how they successfully grow it, where and how… and how they design the garden around this fascinating plant. 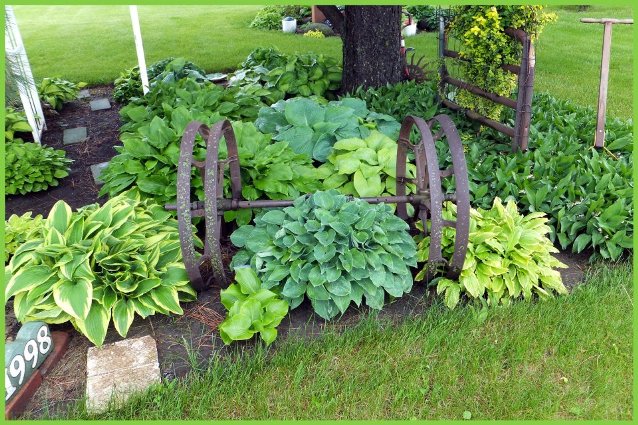 Mary Taylor’s peonies‎ peak out from under the gorgeous hosta

Mary Taylor Love my hosta, this is ‘Choo Choo Train,’ with the peonies peeking through.

Catherine Ingram says, “I love hosta especially because they are so easy to divide in the spring!”

Christina MacEachron says, “Hosta prefer most shade but a little sun is needed. These perennials come in many sizes and shades of green. Some have white leafs or white stripes, and they are also very strong plants to be able to split in spring or fall. My favorite is a large leafed hosta that has shoots of white flowers when is in bloom and they smell like a jasmine.” 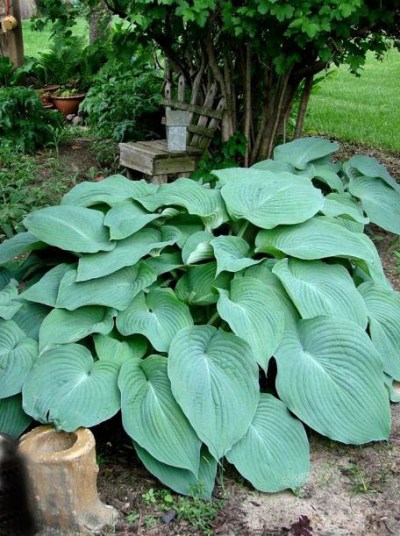 Jeanne Sammons says, “I love pretty blooms but I am a big fan of hosta leaves! I’m a hosta lover! They just grow and grow and always have beautiful foliage some are mine are ‘sun lovers’ but the largest varieties I grow do best in part shade…I love ‘em from the time they pop out in the spring til the snow flies!”

Lori Battista confides, “We have a huge hosta behind the house and hubby named him ‘Seymour.’” 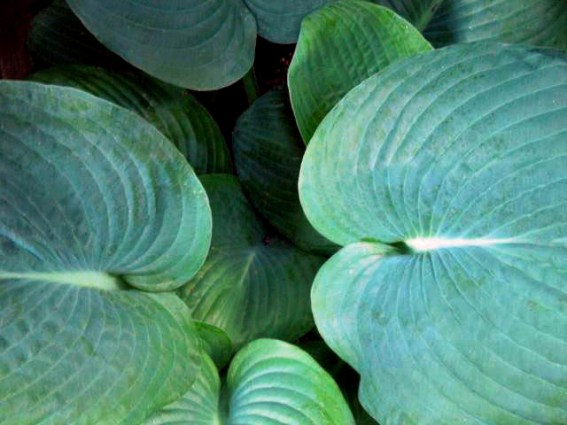 Penny Shepherd says, “I just got my first hosta this year. I hope to get it planted this afternoon before the rain. If it does well, I will invest in more. So very anxious to see how it does and excited to have one!”

Laurie Hughes tells us, “I grow Hosta also. Lovely memories visiting my grandparents on their farm. I jump to dig it up every time someone says they have some that are due to be separated.”

Care and feeding of hosta

Patti Hitzler says, “Hosta are the easiest plants to grow! Just put them in a part shade place, water and let them be. They are so hardy, I don’t think I’ve ever had one not thrive. As others have said, very easy to divide too. I like to do it in the fall, so they are ready to grow in a nice round shape come spring.” 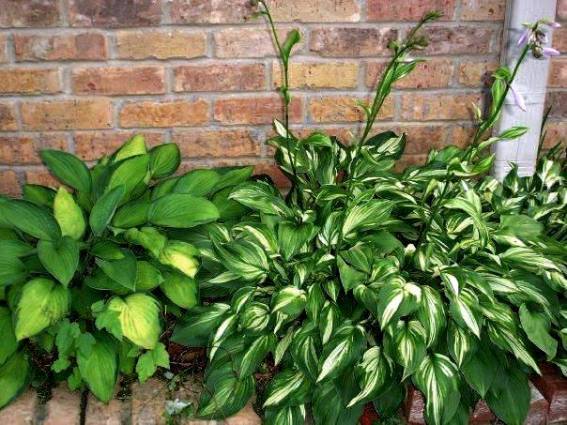 Shirley Martin These are our hosta in our back yard in East Texas. We have sandy soil and in zone 7, but we keep ours mulched to keep them from drying out too much in the hot Texas summer.

Cheryl McMillan says, “Hosta are very cold tolerant. American gardening zone 3. They’re are marketed as shade lovers but they are shade tolerant. They will do better in the sun ( except for the blue ones ). The more sun=more water. I’ve never managed to have one die on me. I even left one in a plastic bag outside for months, checked on it for water and it still survived.” 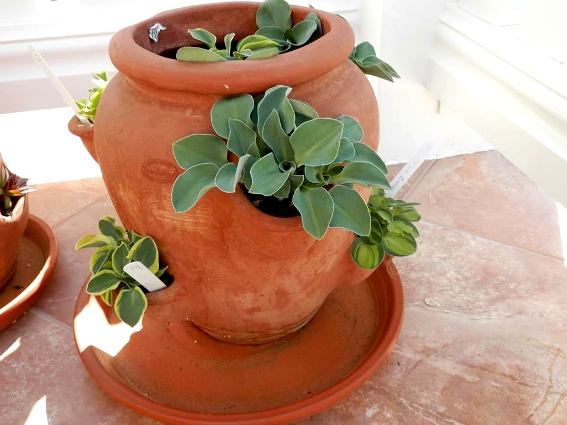 Shirley B. Carlen: I started this miniature hosta pot last year. Exciting to see all the plants come back and growing.

Nancy K. Meyer tells us, ” When buying starter plants from the nursery, remember the first year they sleep, the second year the creep, and the third year they leap. If you want bigger plants in a hurry, see if a friend can give you a division from an established plant.”

Mary Disbrow: “The deer love my hosta. I’m going to build a fence around them to keep the deer from eating them. My deer prefer the white and green ones the best.” Nice to know! 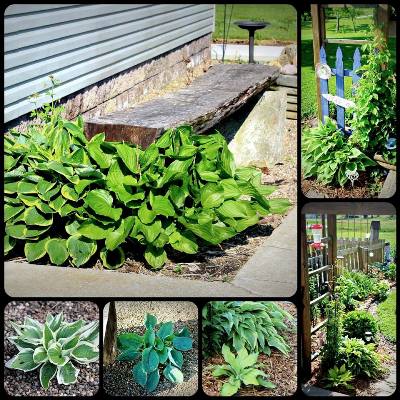 Lisa Collier‎ says, “Over the last couple of years I have been filling in the end of our garage bed. It gets mostly shade, so I have been moving my hosta to this area. You can see the ones here on the end are really happy there! The large stones that the log is sitting on is corner stones from the chimney of the old farmhouse that sat where ours does now. Can’t wait until some of the others have a chance to grow larger and put on a show!”

Hosta and rust! How to display hosta

Hosta look best when grouped together to show the variety of leaf shape and color. If you are a Flea Market gardener you add bright blue bottles or other vintage or discarded treasures you’ve found. Vertical elements like shiny glass totems would set off the low uniform leaves. Other plants that look especially well with hosta are Corals bells (Huechera), spiky Iris and low ground covers like wild strawberries. 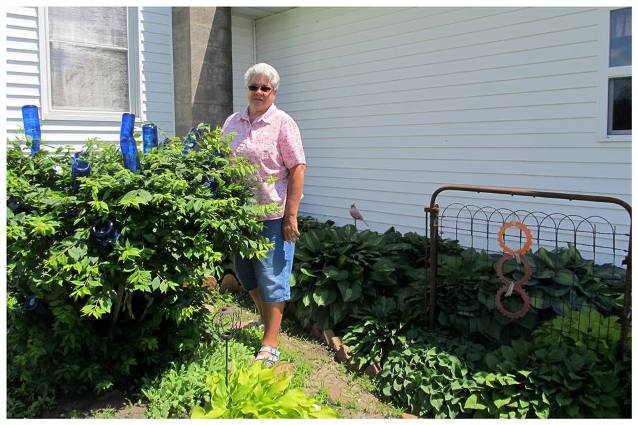 Nancy K. Meyer among her hosta

Nancy K Meyer is the Queen of Hosta and Rust! On her family farm, she displays the tools her parents and grandparents used, placing them among the large green leaves.

Nancy says, “I fell in love with hosta, once I discovered them, and now have over one hundred different varieties. As I made my Hosta beds, I added pieces of our farming past –old plows, pump, kettles, iron wheels, my childhood bike, girls trikes, plus my parent’s bowling balls, Aunt’s wringer washer, etc. to my gardens. I did not realize so many other gardened with rust until I found my kindred spirits at Flea Market Gardening.”

To see how she displays some of her plants, let’s take a stroll through the large grassy area behind her house, she calls her ‘park.’ She says it takes seven hoses to water out that far! 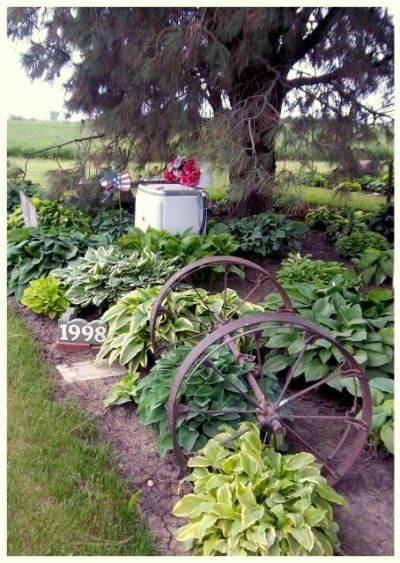 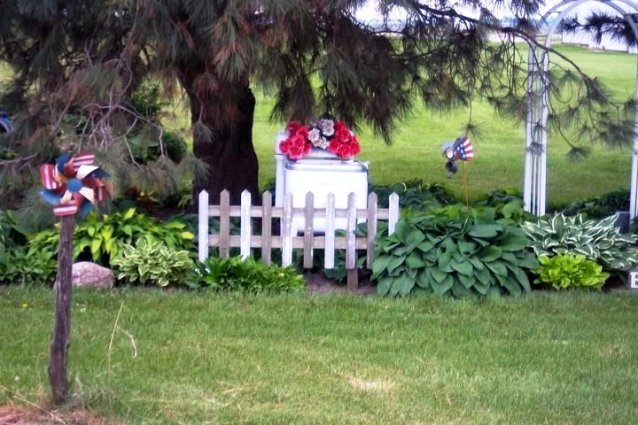 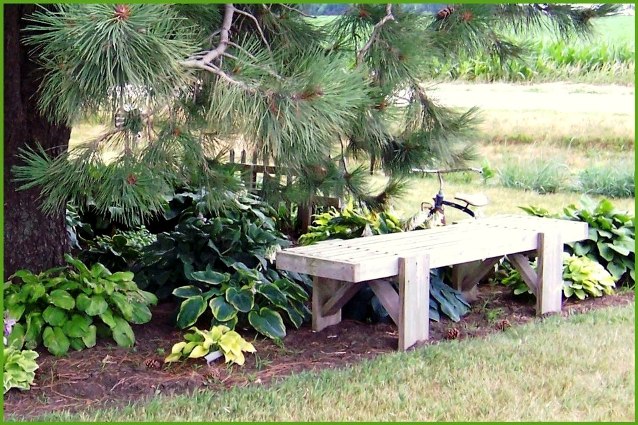 A serene spot in Nancy’s garden “The Hosta in my park are very lush and green this year.” 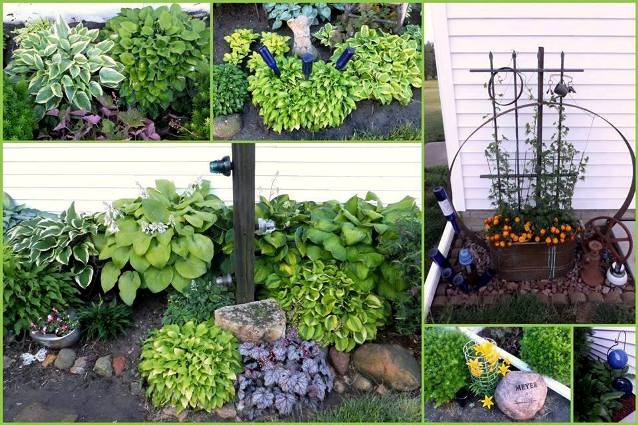 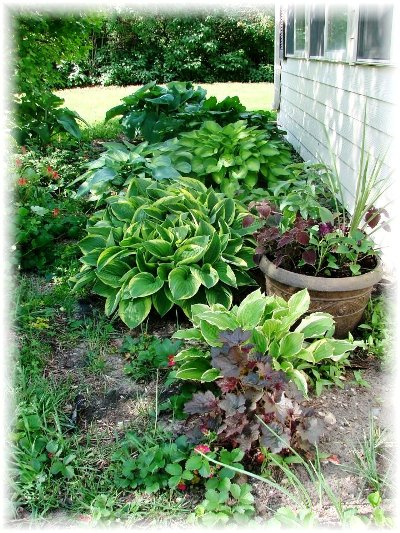 Jeanne Sammons says, “This is mostly shady area …sandy soil I’ve composted over the years…they grow wonderfully! You may be able to see a wild strawberry plant that I’ve let wander in the front!” 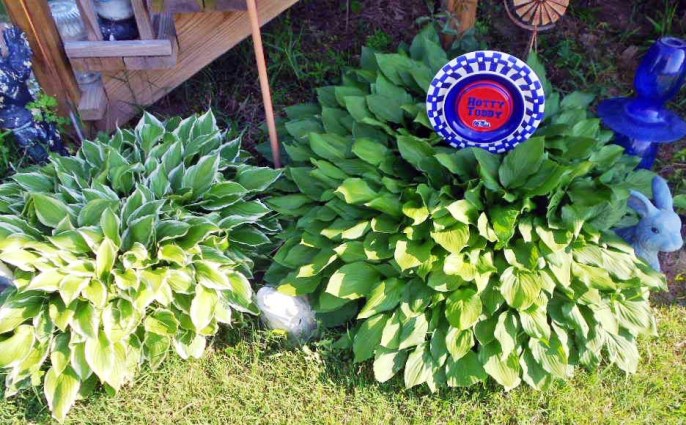 Funky Fusions Garden Art says, “I love my hosta! This year’s plants are already showing out, the one with the Ole Miss plate flower is 4ft x 4ft and still growing!” 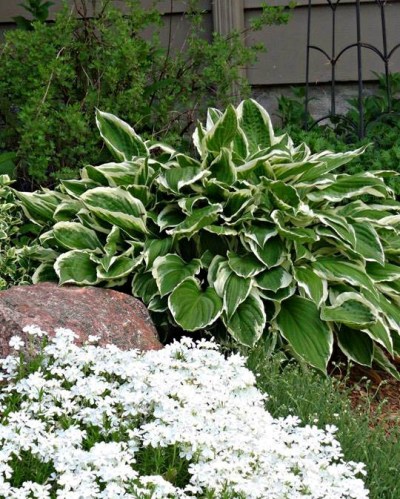 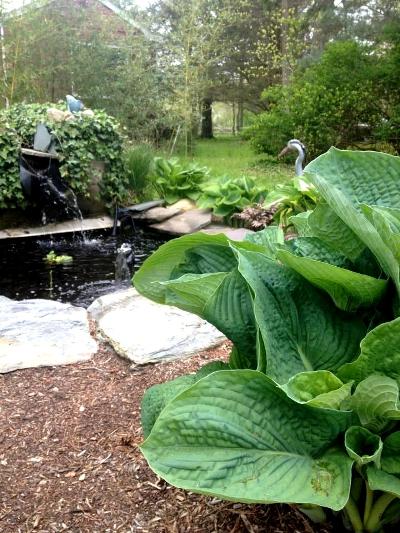 Some warn against snails or deer or chickens! You may need a protected area or deer fence to enjoy hosta..

Linda Meyer: When I lived in Tennessee they told me to put small saucers around the the plants and fill with beer. I did that and found the slugs belly up in the morning.

Carol Swann says, “Slugs can be controlled with diligent picking. I go out at first light in the cool of the morning, gather up every slug I can find in a container and then dump them in the wood drove. They’re toast if the fire is on, and if not the wood ash will dedicate them. After a couple of seasons you’ll notice a decrease in the population.”

Barb Howard: I love hosta, but unfortunately, so do the deer. They can wipe them out in one night. So far though, they have always grown back the next year.

Mona Petrick says, “Mine live in peril, turkey, rabbits, deer take them down every year….down to the nubs. I read baby powder is a deterrent and sprinkled last night, then the article said once hosta gets more developed, use garlic powder…THAT DID it, they disappeared overnight, seems the critters liked the extra flavor.

Cristy Rogers My chickens love them so I only have one left!

Where to plant Hosta

Part shade or sun, in a flower bed or in a container! 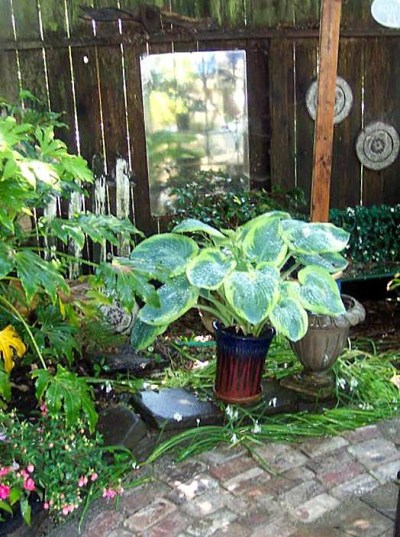 Melanie Gregson: I have kept a hosta in a flower pot for about 5 or 6 years because of apartment living. Not only has it survived. but it has gotten more beautiful each year! This year, after finally buying our own home, I plan to put it in the ground in the spring. I’m almost afraid to, because it has done so well in it’s pot! Any suggestions to ensure survival?

Sandi Kay I am in south central Iowa and i have several different hosta in my garden. As companions, I love the toad lilies, variegated Solomon seal, and spiderwort that keep the hosta company.

Carolyn Davies says, “I love all my varieties of hosta. When they get too big and aren’t growing well, I divide them, leaving the ‘core’ plant where it is and plant the divisions elsewhere. The ‘core’ plant recovers wonderfully. I love looking at new varieties and styles of hosta and add new ones when I can find one I can resist. I’ve lived in the same house for 30+ yrs—and started out with hosta!”

Joy Johnsen: I love the golden hosta…they will take full sun…unlike all the others…. 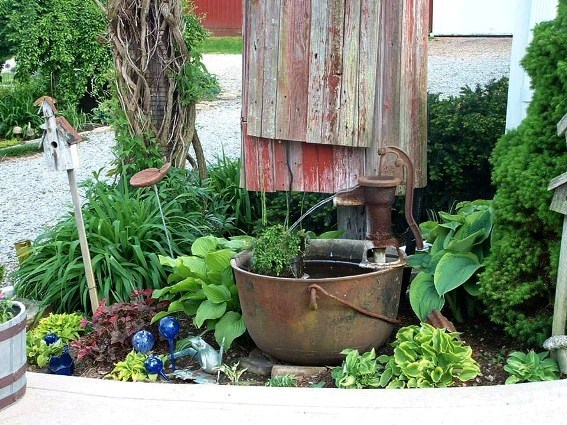 Diana Daily says, “Aren’t these smaller hosta neat. They are under a weeping cherry tree.” 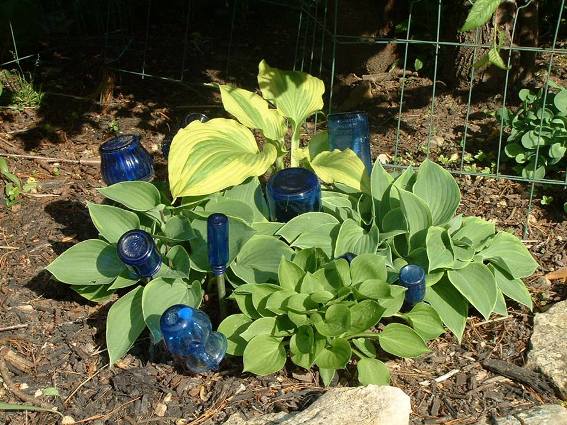 Diana says, “Here are some of the smaller hosta in my garden. I love the little blue bottles in and around the grouping.

Sue Brunette sums it up, “Hosta are very hardy. I am zone 4 and years ago I forgot that I had just thrown a bunch into a pot-friends had too many and gave us some they dug up. Well, after being buried in snow all winter in this pot instead of in the ground I figured they were toast. Nope, they started growing in spring so I split them up and planted them in my yard. I have since divided them many times.

Also, I don’t think it matters when you transplant Hosta, they are very rugged and seem to thrive no matter what. As long as they get water and especially if they are in the sun. Obviously, some types are more delicate but so many are incredibly easy and fast growers too. Give em a try! This plant is amazing and it becomes addicting!”

Get more great gardening ideas and advice on www.fleamarketgardening.org.