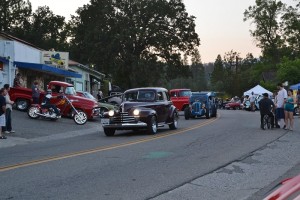 NORTH FORK – After a summer of fires and the stress of evacuations, the North Fork community was ready for a street party last Saturday night.

With about 15 vendors, 3 live bands and more than 50 classic cars lining the street, a great time was had by all of the nearly 600 people who came out to celebrate and mingle.

In addition to the classic car show, the artists at the Greater North Fork Art Gallery worked hard setting up a temporary gallery in the former location of Sierra Video. There were 51 cars registered and voted on for the awards, and a few more that just came to be a part of the show.

“We got great feedback as we walked through the event,” said Dee Salazar of Bass Lake Realty, who is vice president of the North Fork Chamber of Commerce. “We were stopped and congratulated by visitors, as well as our vendors, local businesses, and classic car owners. They are all looking forward to next year.”

The first Hot August Night was held in 2013 and was the brainchild of Scott Marsh, owner of Slim’s Koffee Shak and past-president of the Chamber. Last year’s French Fire derailed the second event, and though the Willow Fire threatened to do the same this year, things went off as planned, much to the delight of North Fork residents and those who made the trip to participate in the festivities. “It’s great to have so much activity in downtown North Fork,” said Jenny Pearson, Chamber board member and Visitors Center director. “It was our goal to bring the car show back, and it succeeded beyond our wildest expectations.”

As firefighters relaxed for an evening at La Cabana Mexican Restaurant – which was closed to the public just for them – everyone else enjoyed the live music, catching up with friends, and the gorgeous cars. They also made sure vendors were sold out of nearly everything.

“We would really like to thank all of the people who came to our Hot August Nights Car Show, as participants or spectators, and for making it such a success,” said Rebecca Kern of Kern Family Farm, and current North Fork Chamber president.

All those with cars entered in the show were given a free goodie bag, and there were plaques for the winners.