Hiking up the 4 Mile Trail to Glacier Point & Sentinel Dome

The 4 Mile Trail led me from the Yosemite Valley floor where the old Leidig Hotel stood in 1870 up to Glacier Point and Sentinel Dome, full of wonderful views of Yosemite Falls and the snowy high country.

We parked at the 4 Mile Trailhead pullout on the right hand side of Southside Drive, west of the Swinging Bridge where there was a sign and two trash cans. The 4 Mile Trail begins in the Yosemite Valley Floor and climbs up a switch back trail 4.8 miles to Glacier Point. You are probably asking why it is called the 4 Mile Trail if it is 4.8 miles in length. When this trail was originally constructed in 1872, it was 4 miles but in the early 1900’s, the trail was reconstructed, resulting in the increased distance. You will gain about 3,200 feet in elevation by the time you get to Glacier Point, then another 920 some odd feet in elevation if you chose to continue up to Sentinel Dome. This trail is closed during the winter because of ice and down trees that routinely occur.

You just might be wondering how this trail came to be. James McCauley, who later built and operated the Mountain House at Glacier Point in 1878, began construction of the Four Mile Trail from the base of Sentinel Rock to Glacier Point in 1871 and completed this project in 1872. He then entered into a contract agreement with the Yosemite Valley Commissioners to build a toll trail up to Glacier Point. McCauley selected the master trail builder, John Conway, to survey the route and build the trail up the 3200 feet to Glacier Point.

Did you know that there used to be a hotel at the base of the 4 Mile Trail? It went by the name of Leidig’s Hotel but there were actually several hotels in the area as you can see from this map. George Frederick Leidig was born 1839 at Stuttgard, Germany and arrived in the United States in 1847. In 1863, he married Isabella Logan Dobbie in San Francisco. She was born 1847 at Jardenhill, Renfrewshire, Scotland and had arrived in San Francisco in 1855. They were living in the Coulterville area by 1865 when their first child was born, in Yosemite Valley by 1868 when their third child was born and remained there until at least the 1900 census. George Leidig died in 1902 in Raymond and his wife died in Fresno in 1923. They are both buried in Arbor Vitae Cemetery in Madera.

When George Frederick Leidig first arrived in the Yosemite Valley, he ran the Lower House for Alexander Black until about 1869 when he tried to get the concession for himself from the state. Black, hearing this, fired him. Black’s Hotel, also known as Lower House, was basically located on the south side of Southside Drive near where the Swinging Bridge Parking Lot is today. Leidig applied to the state to make his own place, which they agreed, and he ran it for 18 years (from 1869 to 1887). It was then torn down as was the Black’s Hotel (formerly Lower House) as part of the conditions of the new hotel keeper of the Stoneman House, JJ Cook. Only a group of locust trees now indicates where this center of pioneer activity existed. This 1888 map shows the location of the Stoneman House which burned in 1896. 1888 Map from George G. MacKenzie Yosemite: Where to Go and What To Do Stoneman House from One Hundred Years in Yosemite (1931) by Carl P. Russell

We are lucky to have accounts from people who visited this area back then, many of those from One Hundred Years in Yosemite (1947) by Carl P. Russell, who gives us a wonderful peek in what is must have been like to visit Leidig’s Hotel back in the 1870’s.

Mrs. Leidig’s ability as a cook was quickly noted by visitors, and, no doubt, the popularity of her table did much to draw patrons. Many are the printed comments in the contemporary publications of her guests. Here is an example:

Leidig’s is the best place in the line of hotels. Mrs. L—— attends to the cooking in person; the results are that the food is well cooked and intelligently served. There is not the variety to be obtained here as in places more accessible to market. After traveling a few months in California, a person is liable to think less of variety and more of quality. At this place the beds are cleanly and wholesome, although consisting of pulu mattresses placed upon slat bedsteads. This house stands in the shadow of Sentinel Rock, and faces the great Yosemite Fall; is surrounded with porches, making a pleasant place to sit and contemplate the magnificence of the commanding scenery. (From Caroline M. Churchill, 1876.)

When A. P. Vivian continued on to Yosemite in January of 1878, he found the Leidig family in the valley and commented as follows on his winter reception:

Our host was glad enough to see us, for tourists are very scarce commodities at this time of the year, and he determined to celebrate our arrival by exploding a dynamite cartridge, that we might at the same time enjoy the grand echoes. These were doubtless extraordinary, but I am free to confess I would rather have gone away without hearing them than have experienced the anxiety of mind, and real risk to body, which preceded the pleasure.

In case you are wondering what a pulu mattress was made of, Pulu was from a tree fern known as the hapu’u pulu in Hawaii. It was popular from the 1850s to 1880s in California because there was no import levy on it and it was soft and cheap.

One of George and Isabella’s sons, Charles Tuttle Leidig, was born in 1869 and is said to have been the first white boy to be born in the valley. He was the first Park Ranger in Yosemite and is pictured fourth from the right in this 1915 photograph. 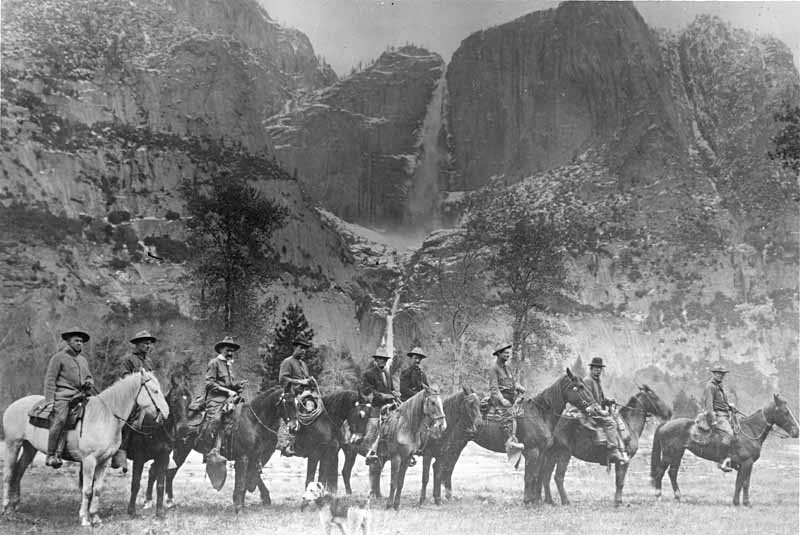 Even though the Leidig Hotel is long gone, the meadow across Southside Drive to the north still carries the name on. This is that spot that you can capture beautiful reflection pictures off of the Swinging Bridge area when the meadow is flooded.

Onward to our hike! As we started up the 4 Mile Trail, we had some beautiful views of Yosemite Valley and Yosemite Falls. We hadn’t traveled too far up the trail when we started coming across patches of ice and snow on the trail in the shaded areas. It wasn’t long before the trail was mostly covered with that ice and snow. Photo of me by Steve Humphry

As we got closer to Glacier Point, we decided to head straight up to Sentinel Dome and catch Glacier Point on the way back. Since we had been dealing with all of that ice and snow on the trail, we headed up Glacier Point Road instead of taking the trail to get out of that ice for a while. But the road turned a bit icy and was a longer route. We took a little time to stop and admire the spots along Glacier Point Road that had amazing views such as Washburn Point. I had planned on taking a dirt utility road up to Sentinel Dome but with the snow, I missed it and ended up approaching Sentinel Dome from the south side, adding some bonus miles. That walk on that stretch was through unbroken snow which clearly showed the tracks of many critters. When we reached the top of Sentinel Dome, the view was incredible! After eating our lunch and admiring that amazing view, we headed back down the trail that led to Glacier Point and were surprised that no one had been on it either and that it was ice free, just full of soft and unbroken snow. After checking out the view from Glacier Point, we hiked back down the 4 Mile Trail, through that same ice and snow. Although it had warmed up some, those shaded areas were still just as icy as they were when we came up so we took it easy as we walked back down. Remember that this trail may not be open much longer. It is closed during the winter because of some really hazardous icy trails with steep dropoffs and and down trees that routinely occur. If you do head up when there is ice and snow on the trail, I think trekking poles make walking on the icy spots easier. If you have ice traction devices, consider bringing those with you in your pack. I brought mine for this hike but forgot them in my car. They were not very useful to me where they were. 😉

Dogs are not allowed on the 4 Mile Trail. One Hundred Years in Yosemite (1947) by Carl P. Russell

Pulu Mattresses in the Gold Rush

Hiking up the 4 Mile Trail to Glacier Point November 4, 2016