Did somebody say free BBQ? It sure doesn't get any better than that! See you there!

Free BBQ for Veterans and Family at The Grove in Ahwahnee

AHWAHNEE — There will be a free BBQ for all veterans and their families this Saturday, September 24, from 11 a.m. to 1 p.m., hosted by The Grove Church in Ahwahnee, located at 42461 Highway 49.

The History of BBQ: A Guide to America’s Favorite Food

There’s something about the smell and taste of smoked meat that brings people together. Perhaps it is a sense of nostalgia, but there’s nothing quite as inviting as a backyard barbecue filled with the sweet aroma of wood smoke from a fire, hot sauce and cold beer.

Barbecue has become an essential part of American culture, and no one group has claimed ownership. There are many stories regarding its history—some based on fact and some based on myth. Read on to learn about where BBQ came from, the different styles of BBQ from all across America, mustard vs. ketchup debate, regional variations, as well as interesting facts about the word “barbecue” (it isn’t even an American word!). 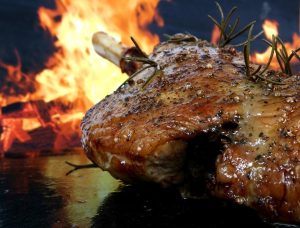 “Barbecue” is a cooking technique that involves slow cooking meat (typically beef, pork, or poultry) over a low heat source, often in a pit outdoors. The meat is often cooked until tender, then either removed from the heat source or kept at a simmer for extended periods of time. Typically, fatty cuts of meat are used for barbecue because the fat drips away from the meat while it cooks. Oftentimes, barbecue is served with a sauce. The word barbecue is believed to come from the word “barbacoa,” which means “basket.” The technique of cooking meat over a low, slow fire probably goes back to the beginning of human civilization. It has been a staple in every culture, with styles varying from region to region.

While the origins of barbecue are uncertain, experts agree that it is the result of a variety of factors. Meat is at the center of the discussion, with many believing that the popularity of pork, a fatty meat, led to the development of the technique. Additionally, the unique woodlands of the South enabled the practice to take shape. The forests of the South were full of oak, which makes excellent coals for cooking. The area also had plenty of pigs, many of them feral, and a need to feed a large number of people. The unlikely marriage of these three elements led to the discovery of barbecue. The process itself is easy: Cut the pig into pieces, hang it over hot coals, and let it slowly cook. The hard part is getting the coals to stay hot enough to keep the meat cooking without burning it. Southern cooks borrowed an idea from the Native Americans and developed a pit in the ground. They covered the pit with dirt, built a fire in it, and kept the coals going for hours, letting the meat cook slowly in the process. Alabama BBQ: Alabama BBQ is a style of barbecue that uses a dry rub. The dry rub is rubbed into the meat before cooking, then the meat is placed in a slow cooker or smoker and cooked low and slow.

Carolina BBQ: Carolina BBQ is a style of barbecue that uses a vinegar-based sauce. The sauce is vinegar based, and the meat is either smoked or roasted.

Memphis BBQ: Memphis barbecue is a style of barbecue that uses a tomato-based sauce. The meat is typically smoked with indirect heat. Interesting Facts about BBQ and ‘Barbeque’

Check out this short video on the history of American BBQ!