DUI Crash Made Real At Minarets

O’NEALS – Two cars sit smashed and broken in the aftermath of what has been reported as a head-on collision at Minarets High School.

In one car, the dazed teenage driver is moaning in pain; his 17-year-old passenger is lying across the hood, bloodied and broken, and another is severely injured, trapped in the back seat.

In the other vehicle, the minor-aged driver and passenger are injured. Both are walking wounded and covered with blood.

This is the scenario that plays out for students at Minarets as first responders bring the message home in an extremely powerful way, of how life can change in an instant. “Every 15 Minutes” is an educational experience directed at high school students that is designed to make terrifyingly real the dangers associated with driving while impaired or while texting. The crash is staged; the emotions are real. And so are the tears that were shed by some during this sobering program, brought to Minarets by the Oakhurst Office of the California Highway Patrol.

With the scene set, students file out of their classrooms and gather around the crumpled cars and mangled teenagers. A sound system then plays out the 911 call where a distraught female caller relays details of the devastating crash to the dispatcher. Within minutes, the relative silence of the deadly scene is broken by sirens, as two CHP patrol cars come racing down the service road. Fire engines arrive next, and as some evaluate the wounded, others use the Jaws of Life to extricate the trapped backseat passenger.

The ambulance is next on scene, and as the EMTs and paramedics tend to the wounded and prepare the most serious for transport, a helicopter tops the horizon and sets down nearby. 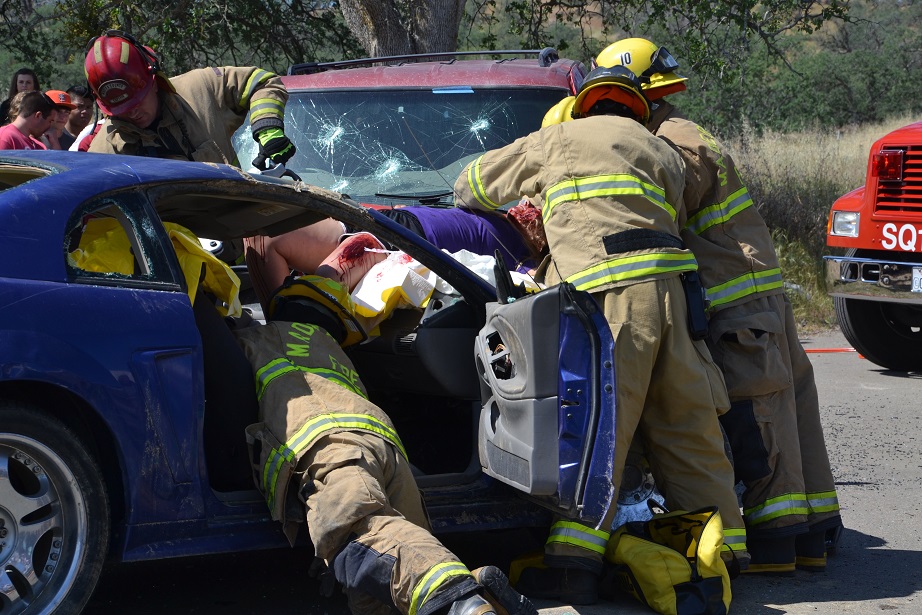 As two teens are carefully loaded onto gurneys and rolled to the waiting ambulances, the crowd hears the EMS personnel transmitting such sobering phrases as “unresponsive,” and “no feeling below the waist.” The sobbing of one of the drivers can be heard as his friends are wheeled away. His injuries are relatively minor considering the impact. The other driver won’t be so lucky.

Now that the immediate crisis has been dealt with, it’s time for officers to deal with the cause of this crash – a teenage driver under the influence.

After failing a field sobriety test and a breathalyzer, the young man, who has just left a party, is cuffed and taken into custody for DUI. His life will never be the same. He has just killed one young girl and put another in a wheelchair; because of one very bad choice. The architects of the program say that every 15 minutes in this country, someone dies as the result of an alcohol related collision. While the “Red Asphalt” series has been shown in schools for years in an effort to impress upon students the devastating impacts of bad choices, Every 15 Minutes engages the kids themselves in staging the crash, acting the parts, writing the script, creating the very realistic “makeup,” filming the entire experience, and editing their work into a 23-minute video. It also gives all of them the opportunity to experience something very few people ever have – being at the scene of a crash from the moment after impact, through all the pain and suffering, witnessing the efforts of the first responders, and seeing it all culminate with a sobering and life-altering arrest.

Media students took video and still shots, while a drone hovered overhead to capture the entire scene for editing into the movie they would create later in the day. Though this is a staged scene, these emergency personnel take this exercise very seriously. They’ve seen the reality play out all too often, and have witnessed firsthand how life changes in an instant. You can see it on their faces as they treat this scene as they would any other. Earlier in the day, the “Grim Reaper” has called selected students out of class, one every 15 minutes, and their obituaries are read to those remaining. The students later return to class as the “living dead,” complete with white face make-up, a coroner’s tag, and a black “Every 15 minutes” T-shirt. They will not speak or interact with other students for the remainder of the day. They stand as watchers on the periphery as the accident scene plays out, and the Grim Reaper moves in to claim another one of their classmates, fatally injured in the crash. The next day, students are called to gather for the funeral of this 17-year-old girl, whose life was cut short in one brief second. The “walking dead” place flowers on her casket, while the young man responsible for this tragedy sits handcuffed just a few feet away from his other victim, now confined to a wheelchair for the rest of her life. In the weeks preceding the staged accident, producer/directors McKenna Chase and Peter Dembach, along with Sierra Ambulance paramedic Gina Hartley and a crew of students, use inventive techniques to create the horrific injuries and film the arrival of the two crash victims as they are rushed into the ER at Valley Children’s Hospital. The mothers are notified as one dies, and the other receives the devastating news that she will never walk again.

They also shoot a segment in the CHP holding cell as the heavy steel doors slam shut, and the dreams of this young man’s life dissolve into echoes down the hallway while he paces the tiny space that is his new reality.

Madera County Superior Court plays host to the final link in this chain of events, as the prosecutor tells the court that this was not an accident, this was a choice, and the judge sentences the teen to nearly 17 years in prison.

Students who participate in the Every 15 Minutes program are asked to write a letter to their parents that begins this way:

“Dear Mom and Dad, Every 15 minutes someone dies as the result of an alcohol related collision. Today, I died, and I never got to tell you… “

For those of us with children and years of life experience, this program is gut-wrenching. One hopes that it had the same impact on the students who participated. As CHP Central Division PIO Johnny Fisher told the students, “every one of these tragedies is completely preventable.” Referring to the “6 C’s” that frame the learning experience at Minarets – Critical Thinking, Competency, Creativity, Collaboration, Communication and Community – Fisher hopes students will add Choices and Consequences, as a result of what they experienced throughout this program. Thanks to Meghan Benson, Sierra Osborn and Anna Rose Chaney for bringing “Every 15 Minutes” to Minarets High School, to all the students who took on this project, to the administration and teachers who embraced it, and to all the first responders who made it so real, including the California Highway Patrol, Madera County Fire Department, Cal Fire and Sierra Ambulance. 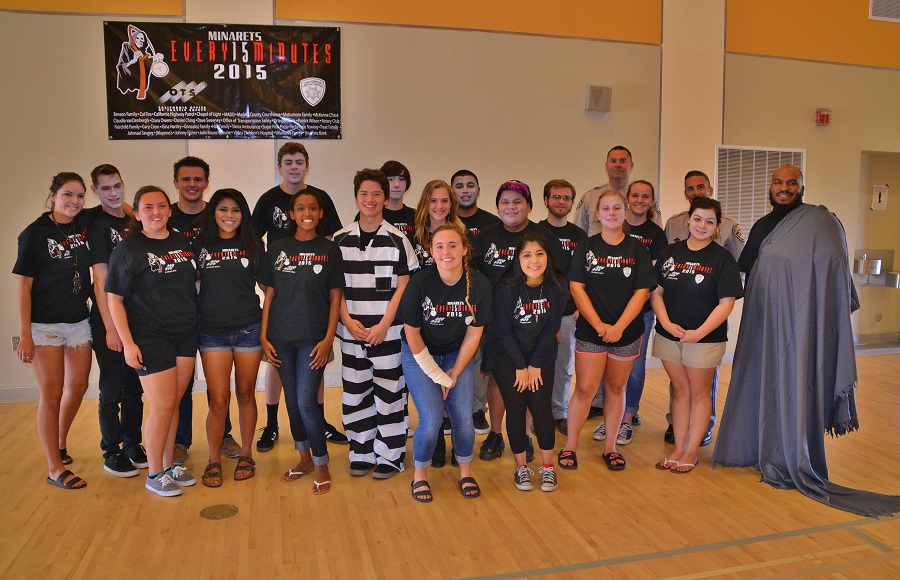 Please take a few minutes to watch the video produced by McKenna Chase and Peter Dembach, and the Advanced Media Group at Minarets High School.

If you are interested in bringing Every 15 Minutes to your high school, click here for more information, or contact your local office of the California Highway Patrol.

“Life’s lessons are best learned through experience. Unfortunately, when the target audience is teens and the topic is drinking and texting while driving, experience is not the teacher of choice.

“The Every 15 Minutes Program offers real-life experience without the real-life risks. This emotionally charged program, entitled Every 15 Minutes, is an event designed to dramatically instill teenagers with the potentially dangerous consequences of drinking alcohol and texting while driving. This powerful program will challenge students to think about drinking, texting while driving, personal safety, and the responsibility of making mature decisions when lives are involved.” Every15Minutes.com