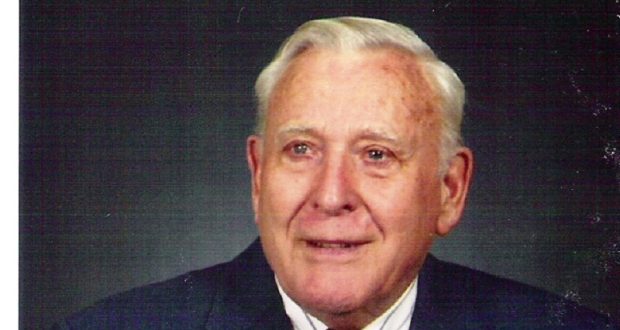 From everyone at Sierra News Online, our deepest condolences go out to the family and friends of Everett H. (Krip) Krippner.

Everett Hale Krippner peacefully passed away December 7, 2019, in Clovis, CA.  He was 97 years old, born in Spokane, Washington, on Aug. 3, 1922. At a young age, his family moved to Seattle, where he attended local schools and was a charter member of Cub Scout Troop 144, founded by his father in 1929.

He earned his Eagle Scout at age 13 in the Boy Scouts. After graduating from Roosevelt High School, he enrolled in the University of Washington as a Forestry major. At the news of Pearl Harbor, he enlisted in the U.S. Army Air Corp, becoming a B24 bomber pilot stationed in the Pacific. During his pilot training, he met his wife, Virginia Cain, and they married in 1944.

After WWII, they settled in Dos Palos. In 1951, he was reactivated into the U.S. Air Force for the Korean War. After returning, he ran a dairy and farmed in Dos Palos, during which time he earned his teaching credential and Master’s Degree in Education at Fresno State. He was a teacher and later became Principal at Dos Palos Elementary School. He coached baseball, was a Boy Scout Leader, played Santa for many years, and was active in the Masonic Lodge and Kiwanis Club in Dos Palos.

He became Superintendent of the Dos Palos Joint Union Elementary School District and retired as a Lt. Colonel from the U.S. Air Force Air National Guard. After he retired from the school district, he moved to Santa Cruz and later to Snohomish, WA, where he continued as a member of Kiwanis and was an active member of his church.

He returned to California to live in Yosemite Lakes Park in Coarsegold, and was a member of the Yosemite Lakes Community Church. He was a substitute teacher after retirement, and was devoted to his family. He was an avid coin and stamp collector, loved to play golf, go camping and fishing, and also loved the outdoors, traveling and participating in church activities.

He will be interred at the San Joaquin National Cemetery with full military honors, January 20th, 8 a.m., in Santa Nella, joining his wife, Virginia Cain Krippner.

In lieu of flowers, remembrances can be sent to the Chief Seattle Council, Cub Pack 144, 3120 Rainier Avenue South, Seattle, WA 98144.